Rock News
by Matt Bishop
August 2, 2017March 19, 2022
(TRR) This Friday, Musikfest kicks off in Bethlehem, PA. For over three decades, nearly a million people a year gather in the Steel City to take part in the week-long festival of music, food, and culture. The celebrations’s crown jewel are the headlining concerts at the outdoor Sands Steel Stage at Steel Stacks. Each year, promoter ArtsQuest brings together a diverse lineup of today’s hottest acts and yesterday’s legends across all genres.

Throughout the festival’s 34-year history, acts like Stone Temple Pilots, Jane’s Addiction, Maroon 5, Train, ZZ Top, Boston, Korn, Poison, Chevelle, 3 Doors Down, Weezer, B.B. King, Skillet, George Thorogood & The Destroyers, The Black Crowes, Stone Sour, Alice In Chains, Molly Hatchet, and many more. In 2013, The Rock Revival partnered with Musikfest to present Avenged Sevenfold in celebration of the festival’s 30th Anniversary. This year once again, the rock and metal genres will have some key players in one of the country’s most storied music festivals.

Guitar virtuoso Carlos Santana makes his return to the Lehigh Valley to kick off Musikfest 2017. Back in August of 2015, Santana co-headlined The Peach Music Festival at The Pavilion at Montage Mountain in Scranton, PA. Last year, he performed at the PPL Center in Allentown, PA with Journey. In 2014, Santana published his memoir The Universal Tone: Bringing My Story to Light which was featured in NPR’s “Best Books of 2014.”  That same year, Santana released his twenty-second studio album Corazón via RCA/Sony Latin Iberia. Santana is undoubteldly one of the greatest guitarists of all time. Thoughtout his career he’s garnered 10 Grammy Awards and 3 Latin Grammy Awards. In 1996 he was awarded the Billboard Century Award and in 1999 his opus Abraxas was inducted into the Grammy Hall of Fame. In 1998, Santana was inducted into the Rock and Roll Hall of Fame and in 2013, he became a Kennedy Center Honoree.

Rock and Roll Hall of Famers Chicago are celebrating 50 consecutive years of touring, a monumental accomplishment for any act. Chicago came in at #9, the highest-charting American band, in Billboard Magazine’s recent list of the 200 Greatest Artists of All Time. The pop-rock icons were inducted into the Rock and Roll Hall of Fame last year. The group has had Top 40 albums in six decades, with dozens of hits including “25 or 6 to 4,” “Saturday In The Park,” ”Beginnings,” “Just You ‘N’ Me,” “Feelin’ Stronger Every Day,” “Hard Habit To Break” and “Baby, What A Big Surprise.”

Chicago’s lifetime achievements include a Grammy Award, multiple American Music Awards, a star on the Hollywood Walk of Fame, a Chicago street dedicated in their honor and keys to and proclamations from an impressive list of U.S. cities. The band’s record sales have topped the 100 million mark and include 21 Top 10 singles, five consecutive number-one albums, 11 number-one singles and 5 gold singles. An incredible 25 of their 36 albums have been certified platinum, and the band has a total of 47 gold and platinum awards.

In a recent interview with Pitchfork, Father John Misty stated, “If you take away my music from me, all you have left is a mustache and a bad attitude.” Misty is bringing his music, his mustache, and hopefully his bad attitude as well to Musikfest this year.

After launching his career in the early 2000s, Father John Misty, aka Josh Tillman, joined the Seattle-based Fleet Foxes, serving as their drummer from 2008-2012. Since 2012, when he released the album Fear Fun as Father John Misty, he has unexpectedly emerged as a solo voice. In April, Father John Misty’s Pure Comedy debuted at the top of Billboard’s Rock, Americana/Folk Album and Alternative Album charts. He’s toured this spring and summer in support of the record, performing at venues and festivals all around the globe including Coachella Music Festival in California, Fuji Rocks in Japan, Osheaga in Quebec and the End of the Road Festival in England. On March 4, he was the musical guest on the iconic Saturday Night Live.

Musikfest promoters ArtsQuest have gotten some very mildly-deserved flack in recent years for booking yesterday’s heroes as opposed to hot up-and-comers. While Misty isn’t exactly an up-and-comer thanks to his contributions in Fleet Foxes, he is exactly what critics of the Fest have been asking for – a right-here-right-now act that is on top of the charts and performing at some of the biggest festivals around the world.

In 2016, Live reunited with original vocalist Ed Kowalczyk for the first time since 2009. This year, the band performed at high-profile festivals including Rock On The Range (Columbus, OH) and BottleRock Napa Valley (Napa, CA). They slated to appear at Pinkpop Festival (Landgraaf, Netherlands), Lollapalooza (Chicago, IL) and many more. In the wake of Soundgarden vocalist Chris Cornell‘s untimely passing back in May, Live stepped in and performed at Rocklahoma in Pryor, OK alongside remaining headliners Def Leppard and The Offspring.

Live’s last album with Kowalczyk was 2006’s Songs from Black Mountain. The band released The Turn in 2014 with vocalist Chris Shinn. To date, the crown jewel if their discography remains 1994’s multi-platinum smash Throwing Copper.

This one is heavy hitter – literally. One of the great hard music acts of their generation, this show is the booking that all the headbangers in Bethlehem wanted. Godsmack have been on the U.S. festival circuit all spring and summer with performances at Chicago Open Air, Northern Invasion, and River City Rockfest. They have been hard at work in the studio working on the follow-up to 2014’s 1000HP. The disc peaked at #3 on the Billboard Top 200, #2 on Billboard Rock Albums, and #1 on Billboard Hard Rock Albums.

The band will celebrate the 20th anniversary of their seminal self-titled debut album this year, and they have pushed back the release of their new record to 2018 in order to celebrate properly. Godsmack headlined 93.3 WMMR’s MMR*B*Q at the BB&T Pavilion in Camden, NJ back in May. During the set, lead singer Sully Erna said to the crowd, “Are you guys seated? They put you in fucking seats for a Godsmack show?” For comparison most recently, Musikfest played host to Avenged Sevenfold in 2013 and Alice In Chains in 2015. Both shows were seated, and both shows lost a bit of energy because of it. We were hoping ArtsQuest would have gotten some more hands on deck to convert the Sands Steel Stage into a GA venue for this one, but no such luck. However, just like A7X and AIC did, we anticipate Godsmack to still put on a hell of a show. It has been quite some time since this editor heard “Vampires” at the Electric Factory in Philadelphia in 2003. Maybe we’ll get lucky and they’ll dust it off for Musikfest.

Godsmack signed with Universal/Republic Records in 1998 and exploded onto the scene that same year with their self-titled debut LP. The album debuted at #22 on the Billboard Top 200, and went on to be certified 5x platinum. From there, Godsmack would go on to release three consecutive #1 albums on the Billboard Top 200 – Faceless, IV, and The Oracle. In 2007, the band released their greatest hits disc Good Times, Bad Times…Ten Years of Godsmack which featured a thunderous cover of Led Zeppelin’s “Good Times, Bad Times.” To date, Godsmack have sold nearly 30 million albums worldwide. They have four Grammy Award nominations to their name, and in 2001 they garnered a Billboard Music Award for Rock Artist of The Year. 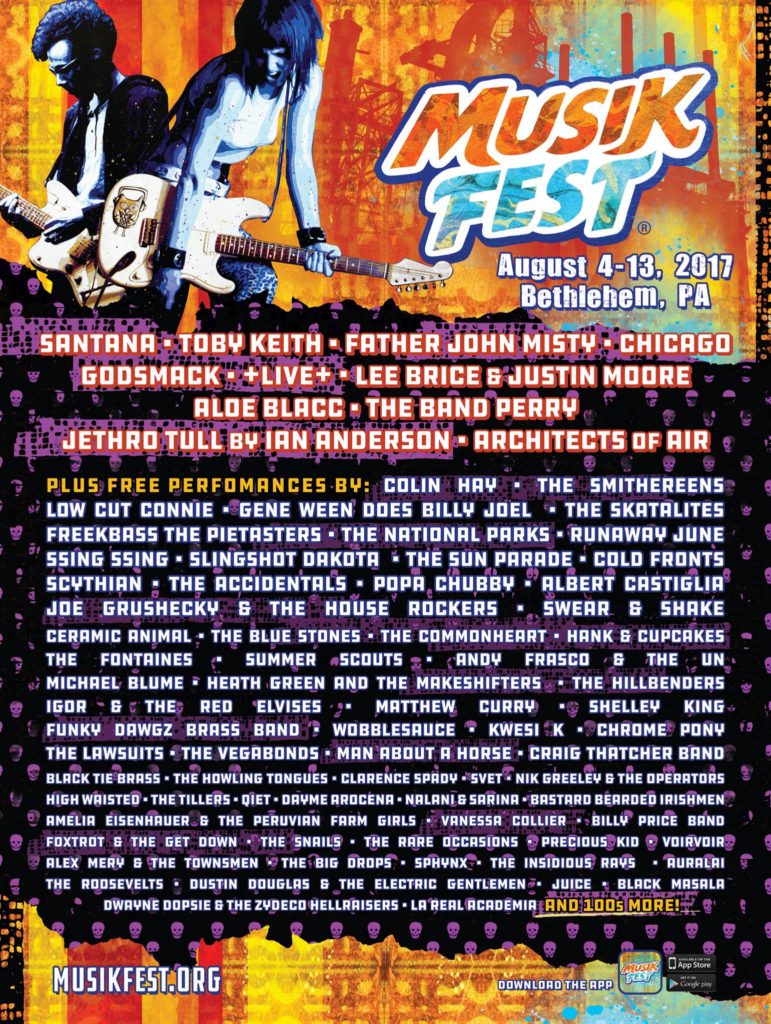