Today, a stellar line-up has been announced for The Concert for Valor in Washington, D.C. Rock icons Metallica, The Black Keys, Bruce Springsteen, and Dave Grohl (Foo Fighters) along with Eminem, Zac Brown Band, Carrie Underwood, Rihanna, and Jessie J, will come together to honor our country’s veterans and their families. The show is set to take place at 7pm ET/4pm PT at The Mall in Washington, D.C. on Veteran’s Day (November 11). HBO and Starbucks have partnered to present the event, and Gary Goetzman, Joel Gallen, and Tom Hanks will be co-producing. This concert will be nothing new for Goetzman and Gallen, who produced and directed respectively The 25th Anniversary Rock and Roll Hall of Fame Concert and the 2014 Rock and Roll Hall of Fame Induction Ceremony. HBO will be broadcasting the show live and online at TheConcertForValor.com. In addition, special appearances will be made by Meryl Streep, Steven Spielberg, Tom Hanks, Jamie Foxx, John Oliver, Jack Black, Bryan Cranston, Bob Woodruff, George Lopez, and more. 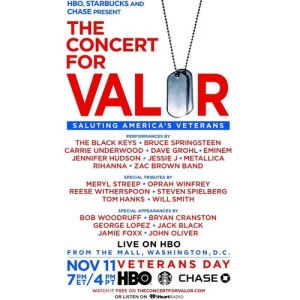 “We are honored to play a small role to help raise awareness and support for our service men and women,” said HBO chairman and CEO Richard Plepler. Their immeasurable sacrifice deserves our nation’s gratitude. This event will not only celebrate their service, but help remind Americans of the many challenges they face on and off the battlefield. We are delighted to join with Starbucks in our mutual effort to pay tribute to our veterans and those currently serving in the military.” Starbucks chairman, president, and CEO Howard Schultz adds, “The post-9/11 years have brought us the longest period of sustained warfare in our nation’s history. The less than one percent of Americans who volunteered to serve during this time have afforded the rest of us remarkable freedoms – but that freedom comes with a responsibility to understand their sacrifice, to honor them and to appreciate the skills and experience they offer when they return home. As many now seek reemployment, now is the time to offer them opportunities to work in our communities to do what they do best: solve problems and lead with selfless service. THE CONCERT FOR VALOR represents a significant and historic opportunity to demonstrate our country’s potential to come together as a nation, and do right by those who have done so much for us. They’ve stepped up. Now it’s our turn.”

Over the summer, Eminem and Rihanna joined forces for a brief stadium tour. Last year, Zac Brown Band and Dave Grohl collaborated on their EP The Grohl Sessions, Vol. 1. Last week, Foo Fighters held a residency on The Late Show with David Letterman, and Zac Brown joined them to cover Black Sabbath’s “War Pigs”. Foo Fighters will be releasing their much-anticipated new album Sonic Highways on November 10 via Epic Records. Their HBO original series of the same title is set to premiere on October 17 at 11pm ET. Foo Fighters will be in D.C. to play special club show at The Black Cat on October 24. Metallica embarked on a massive world festival tour this summer, and are currently working on new music for their next album. The band will be releasing a 12″ vinyl of their new single “Lords of Summer” on November 28 for Record Store Day, and they will be releasing the live recordings from every 2014 show on CD and vinyl starting in November. – by Matt Bishop 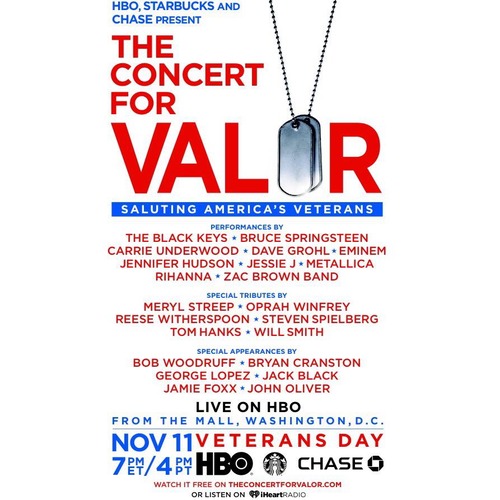 BUSH UNVEIL TRIPPY NEW MUSIC VIDEO FOR "THE ONLY WAY OUT"