BUSH UNVEIL TRIPPY NEW MUSIC VIDEO FOR “THE ONLY WAY OUT”

English alt-rockers Bush have unveiled their trippy new music video for “The Only Way Out”, the first single off their much-anticipated new album Man On The Run which is due out on October 21. The album’s first single “The Only Way Out” is set to hit the radio waves on September 9. For the past several months the band has been working with Grammy Award-winning producer Nick Raskulinecz (Alice In Chains, Foo 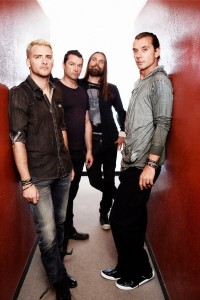 Fighters, Deftones) putting the finishing touches on the record. The band has been recording at Studio 606 in Northridge, CA, which is owned by Foo Fighters frontman Dave Grohl. The new disc is the much-anticipated follow-up to their 2011 effort, The Sea of Memories, which was the band’s first studio release in a decade. The album hit #18 on the Billboard Top 200 and #8 on Billboard Top Rock Albums. Bush made rock radio history when the album’s lead single, “The Sound of Winter”, became the first self-released song ever to hit #1 on Alternative Rock Radio. The track maintained the spot for six consecutive weeks.

Bush formed in London in 1992 and have sold nearly 20 million records in the U.S. and Canada alone since then. The band has dropped 17 consecutive Top 40 hit singles on the Mainstream Rock and Modern Rock charts, including 11 Top 5 hits and six #1 hits – “Comedown,” “Glycerine,” “Machinehead,” “Swallowed,” “The Chemicals Between Us” and “The Sound of Winter”. Bush’s 1996 effort, Razorblade Suitcase, debuted at #1 on the Billboard Top 200. This year marks the 20th anniversary of Bush’s seminal debut album Sixteen Stone, which hit #4 on The Billboard Top 200 and included their legendary hits “Comedown,” “Glycerine”, “Machinehead,” “Everything Zen” and “Little Things”. Hopefully, the band has something special planned to celebrate the occasion. A remastered vinyl release of Sixteen Stone would be an excellent start, and a tour on which they play the album in-full would be pretty awesome as well. Just sayin’, guys. – by Matt Bishop (Photo Courtesy of Joseph Llanes)