Tim Commerford (Rage Against The Machine, Audioslave) has really put his blood, sweat, and tears into his new project Future User…especially his blood. To celebrate Record Store Day on April 18, Future User is releasing a limited edition/hand-numbered 12″ version of debut album #SteroidsOrHeroin pressed on 180-gram blood red-colored vinyl…using Commerford’s real blood (there will also be a limited edition of clear vinyl versions). This special edition will be available at your local retailer and features new album art created just the for Record Store Day release. Go to www.RecordStoreDay.com for more info. 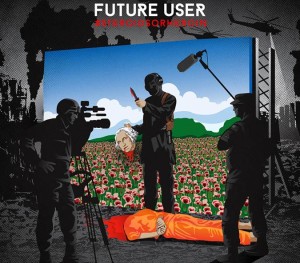 Future User recently premiered the music video for their new single “Mountain Lion”. The fast-paced clip features Tim setting himself on fire (a reference to RATM’s debut album cover, perhaps?) as well as an appearance by cycler Lance Armstrong. In addition to his familiar duties on bass, Commerford is also the band’s frontman. He formed the group with collaborator/composer Jordan Tarlow. Renouned producer Brendan O’Brien (AC/DC, The Killers, Pearl Jam, Soundgarden, Red Hot Chili Peppers) plays guitar on the entire album, but is not an official member of the band. O’Brien and Commerford go back a ways, as O’Brien produced Rage Against The Machine’s The Battle of Los Angeles (1999) and and mixed Audioslave’s Out of Exile (2005). The band’s debut album #SteroidsOrHeroin dropped on February 24 via the band’s own label Middle Ring Partnership.

“I wanted this to be more about music than personality,” says Commerford. “That meant launching this project without letting people know it was me. Fair or not, we knew the songs would immediately draw comparisons to my past work, so it was important to let the music begin with a life of its own. We started releasing songs four months ago, so it feels like a good time to now let the cat out of the bag. Hopefully fans will be intrigued and go back and check out the other songs and videos and give them life all over again.” As he moves into the next chapter of his career, one thing remains certain for Commerford – “I think you still need to use music as a way to say something that’s important, and I’m always gonna do that. Always.” – by Matt Bishop

AC/DC PREMIERE NEW MUSIC VIDEO FOR "ROCK THE BLUES AWAY"