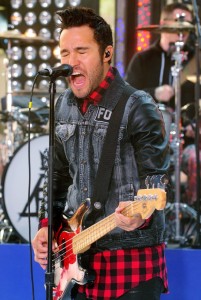 As temperatures are are rising, so is the anticipation of another epic summer concert season. This year, one of the highlights is The Monumentour with co-headliners Fall Out Boy and Paramore along with special guests New Politics. Today, I had the chance to speak with Fall Out Boy bassist and songwriter Pete Wentz about the band’s upcoming blockbuster tour. I asked Pete how the pairing with Paramore came about. “Our fans have been asking for us to tour with Paramore for a long time,” he said. “We reached out to their management via our management, but they were busy at the time. Then we played a bunch of radio shows together over christmas and talked about it some more. I think Jeremy (bass, Paramore) came up with the name ‘Monumentour’, and after a few more emails back and forth we were all set.” Fall Out Boy are still touring off their latest effort Save Rock and Roll which came out just over a year ago. “As far as new music goes, we haven’t officially started but we are coming up with all kinds of crazy ideas,” Wentz said. “Not necessarily like an EP or an album, but we’re far more open to doing something that people would consider to be outside our genre”. For the tour, Wentz said the band took a look back on classic tours by the likes of Guns N’ Roses, Iron Maiden, Metallica, and others to get grand and old-school ideas for the Monumentour. Wentz concluded, “This is the last representation of this album cycle in America, and it will be our biggest yet.” The Monumentour is set to kick off this summer on June 19 at the Xfinity Theatre in Hartford, CT and wrap up on August 17 at the Sleep Train Pavilion in Concord, CA. Tickets are on-sale now via www.FallOutBoy.com and www.Paramore.net. 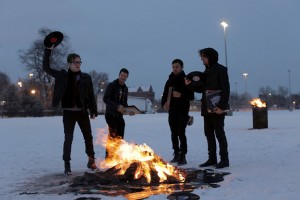 Fueled By Ramen and released their debut album, Take This To Your Grave. The band played a handful of dates on Warped Tour in 2004, and also landed a slot at South by Southwest. The band hit pay-dirt with their sophmore effort, From Under The Corked Tree, in 2005. It debuted at #9 on the Billboard Top 200, selling over 68,000 copies in it’s first week of sales. The album quickly went double-platinum and produced three hit singles, including “Sugar, We’re Goin’ Down”, which was one of the biggest songs of the decade. The album earned the band their first Grammy Award nomination for Best New Artist. The band won the Viewer’s Choice Award at the 2006 MTV Video Music Awards. Fall Out Boy toured on the Nintento Fusion Tour in 2005 alongside Panic! At The Disco, Motion City Soundtrack, The Starting Line, and Boys Night Out. 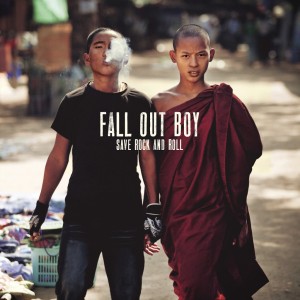 In 2007, Fall Out Boy released their third album, Infinity On High. The highly-anticipated album debuted at #1 on both the Billboard Top 200 and Billboard Rock Albums. The band released five singles from the album, including the smash hit “Thnks fr th Mmrs”. The album went on to achieved platinum status just one month after it’s release, selling over 260,000 units in it’s first week of sales. The band toured with support from All-American Rejects and Hawthorne Heights, and headlined the 2007 Honda Civic Tour. The band quickly returned to the studio and released Folie à Deux in 2008. After embarking on a massive headlining tour, the band went on hiatus in 2010. Fall Out Boy resurfaced this past year with their new album, Save Rock and Roll, which debuted at #1 on the Billboard Top 200 on April 12, 2013. It sold over 154,000 copies in it’s first week of sales and the lead single, “My Songs Know What You Did In The Dark (Light ‘Em Up)” has already gone triple-platinum. The album ranked at #47 onTheRockRevival.com’s Top 50 Rock Albums of 2013. – by Matt Bishop (@The_MattBishop) (Top Left Photo Courtesy of Dan Jackman/WENN)