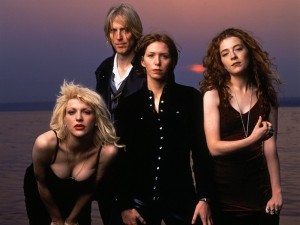 The infamous Courtney Love has been hinting at a Hole reunion since she posted a photo of herself and founding guitarist Eric Erlandson on Twitter last year. Now, the rumors are no more. Love and Erlandson have reunited, along with Melissa Auf Der Maur and Patty Schemel. In an interview with The Quietus yesterday, Courtney Love stated, “I started playing with Patty and Melissa and Eric, just to see how that was. We already played like three or four times in the last week.” The classic Hole lineup last released an album in 1998 – Celebrity Skin – which hit #9 on the Billboard Top 200 and went on to sell over 1 million copies. The band broke up in 2002. With only Courtney Love still in the band, Hole released their fourth LP Nobody’s Daughter in 2010. Throughout their career, the band has been nominated for four Grammy Awards and two MTV Video Music Awards. The newly-reunited Hole are currently rehearsing and working on new songs. Sometime in the next two months, Courtney Love is expected to drop a solo single, “Wedding Day”. She is set to embark on a solo UK tour in May. – by Matt Bishop (@The_Matt Bishop)

Welcome to the Revival of rock 'n' roll music. The way you used to hear rock, see rock, and feel rock is going to be shattered into a million pieces, reassembled, and revived. Dive into the realm of rock with interviews, concert coverage, and breaking news that make the music seem real again - in your ears, in your mind, and right in front of your very eyes. You'll feel the cool steel of the guitar strings and the smooth wood grain of the drum sticks right in your hands, all with the echoes of reverb in your head. This is the way rock was supposed to be experienced. Welcome to the Revival of rock 'n' roll music.
View all posts by Matt Bishop →
Tagged  90s rock, alternative rock, courtney love, courtney love news, courtney love uk tour, courtney love wedding day, Eric Erlandson, grunge, hard rock, hole 2014, hole band, hole band 2014, hole new album, hole new music, hole reunion, Melissa Auf Der Maur, music, music news, Patty Schemel, pop rock, rock music, The Rock Revival, TheRockRevival.com.
Bookmark the permalink.