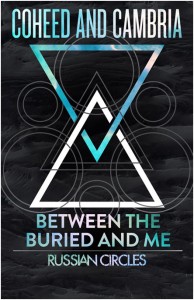 Coheed and Cambria have recently announced a North American Tour with Between The Buried and Me. The tour, which treks across the U.S. and Canada in February-March 2013, will feature support from Russian Circles. Coheed and Cambria will be touring in support of their latest album, The Aftermath: Ascension. The album, released on October 9, hit #5 on the Billboard Top 200. It is the first installment of a two-part concept effort from the band The album follows the The Amory Wars storyline, and concentrates on the character Sirius Amory. The Amory Wars is a comic book series written by Coheed and Cambria frontman Claudio Sanchez. Part Deux, titled The Aftermath: Decension, will follow on February 5, 2013, one day after the tour commences. The band’s previous album, Year of The Black Rainbow, also hit #5 on the Billboard Top 200.

Between The Buried and Me will be embarking on their first North American tour since the release of their latest album, The Parallax II: Future Sequence, on Metal Blade Records. Much like Coheed and Cambria’s latest release (except one step ahead), the album is a continuation of their previous EP, The Parallax: Hypersleep Dialogues. In the last few years, the band has toured with the likes of Mastodon, Killswitch Engage, Protest The Hero, August Burns Red, The Black Dahlia Murder, Lamb of God, and more. In the decade since their first self-titled release, Between The Buried and Me have become a force to be reckoned with in the metal world. – by Matt Bishop

Touring The Machine - Jesse Hasek and Brian Vodinh of 10 Years