Touring The Machine – Jesse Hasek and Brian Vodinh of 10 Years 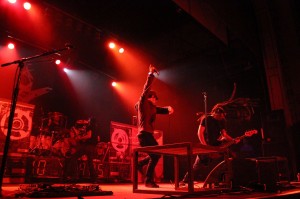 Alternative heavy rock giants 10 Years are touring like a machine in support of their new album, Minus The Machine.  The album debuted at #26 on the Billboard Top 200, with nearly 12,000 copies sold in its first week of release. The album was the band’s first release on their own label, Palehorse Records, in partnership with Warner Music Group’s Independent Label Group (ILG).

I recently caught up with vocalist Jesse Hasek and drummer Brian Vodinh on their 2012 Cutting Like Knives Tour to talk about their new record, the tour, and much more. The bands fifth release was their first independent one. “My studio is where we recorded this thing, so at any given time we could go in and start experimenting with stuff,” Brian commented. The band made the collective decision to produce and record the album independently to enhance their creative process, and to remove the constraints and pressures that come with being on a major label. “We never really liked the idea of going in [the studio] and trying to write a single,” Jesse stated. “It takes the emotion out of it, and it seems like your chasing the trends instead of just doing what you wanna do and what comes natural.”

The last time I caught up with 10 Years was on the red carpet at the 48 Hours Festival in October 2011 in Las Vegas, NV. 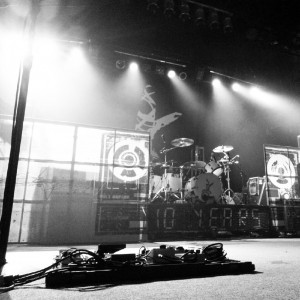 When I asked if there was more of a connection with the fans at the smaller venue shows as opposed to large festivals, Brian said, “Absolutely. Especially headlining, those people really know our songs. They’re die-hards.” Five albums into their career, as far as picking a setlist goes, the guys said it’s not such an easy task anymore. “We’re more excited about the new album than anyone, but we have to keep in mind that it takes time for people to digest,” Jesse said. “People still want to hear stuff they already know.” With a catalog filled with hit singles and fan favorites, it’s not a bad problem to have.

10 Years stepped to the forefront of alternative heavy rock in 2005 with the release of their major label debut, The Autumn Effect. The album went #1 on the Billboard Heatseekers Chart, and the band scored a smash single with “Wasteland”, which was a #1 Rock hit. To date, the band has sold more than 800, 000 albums worldwide and has toured in good company with the likes of Linkin Park, Korn and the Deftones. The band exclusively made the announcement in our interview about their new single, “Dancing With The Dead”. The Cutting Like Knives Tour culminates in December with an appearance on the ShipRocked Cruise. The Machine is touring in full force. Get your tickets, crank it up, and ready to dance with the dead. – by Matt Bishop (Photography by Matt Bishop)

The View from the Bottom is Looking Up - A. Jay Popoff and Kevin Baldes of Lit