With Music From Rancid, The Mighty Mighty Bosstones,

A limited number of General Admission and VIP passes are still available for purchase at www.scallywagfest.com

Band performance times for Scallywag! are as follows (subject to change):

During VIP and early entry tastings (from 12:00 p.m. – 4:00 p.m.), and general admission tastings (from 1:00 p.m. – 4:00 p.m.), Scallywag!attendees will enjoy unlimited craft beer samples from top California breweries and more. Local artisan food trucks and pop-up restaurants will also be on site selling a variety of delicious and unique food options throughout the day and evening. Craft beer and other libations will be available for purchase at concession stands as well.

For more on Scallywag!, visit: 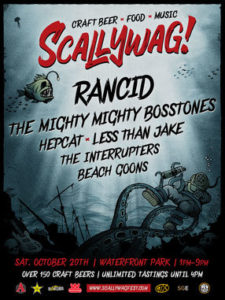