Features
by Matt Bishop
August 12, 2019March 19, 2022
(TRR) – Last night, rock icon Bryan Adams brought his Shine A Light Tour to the Santander Arena in Reading, PA. The hitmaker is sprinkling in some solo dates amid his co-headlining trek with Billy Idol. With full stage production and an extensive setlist, Adams helped Y102 celebrate the station’s birthday with style. Adams’ new album Shine A Light arrived back in March via Polydor Records. The album debuted at #1 on the Canadian Albums Chart. Adams worked with several songwriters on the record. He co-wrote the album’s title track with pop superstar Ed Sheeran. 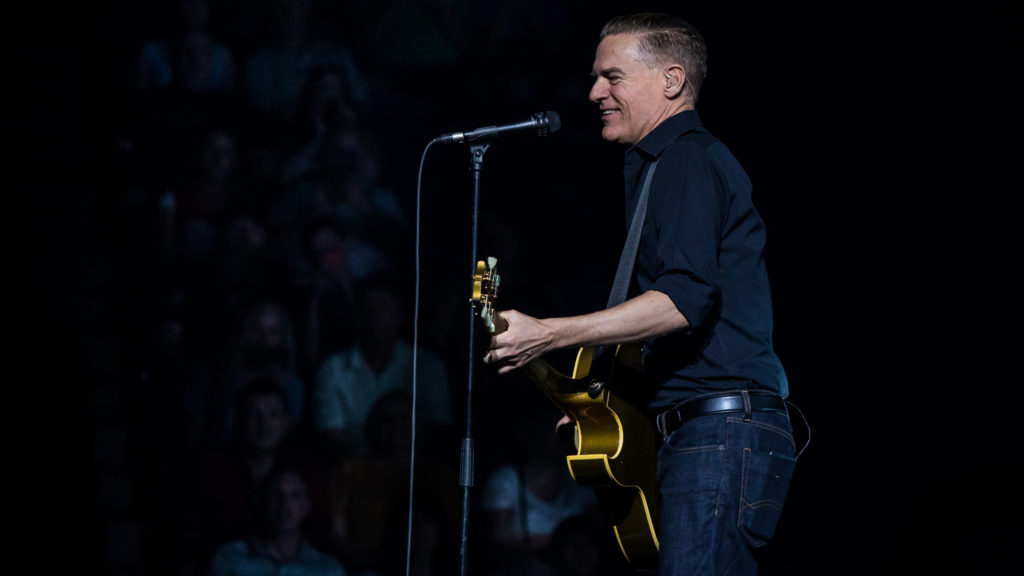 In front of a massive LED screen, Adams took the stage and opened with his melodic hit “Someone.” From there, he showered the audience with a huge hit-filled setlist of nearly 30 songs. Early on, the dangerous opening riff of “Run To You” brought the crowd to its feet.

Other highlights included “Can’t Stop This Thing We Started,” “18 ‘Til I Die,” “This Time,” plus the seminal “Cuts Like A Knife” and his signature anthem “Summer of ’69.” Ballads “Heaven” and “(Everything I Do) I Do It For You” sounded powerful live.

He also performed two offerings from his latest LP – “I Could Get Used To This” and the album’s title track.

Bryan Adams still has it, that much is certain. We’re not sure he ever really lost it, actually. At this point in his career, playing a 28-song headlining set speaks volumes. Moreover, the fact that there was a mother with her young child in the front row confirms Adams’ staying power. Nearly 40 years after the release of his debut album, its clear that he has transcended generations. And with essentially four decades of smash hits, his body of work has secured him a place in rock history.

Bryan Adams broke out in 1983 with the release of his seminal album Cuts Like A Knife. The following year, Adams catapulted to superstardom with the release of his masterpiece Reckless. The album spawned six singles – “Run To You,” “Heaven,” “Summer of ’69,” “Somebody,” “One Night Love Affair,” and “Its Only Love.” All six songs cracked the Top 15 on the Billboard Hot 100, a feat only accomplished by Bruce Springsteen (Born In The USA, 1984) and Michael Jackson (Thriller, 1982). Throughout his career, Adams has amassed 20 Juno Awards. In 1992, his ballad “(Everything I Do) I Do It For You” garnered the GRAMMY Award for Best Song Written For A Motion Picture, Television, or Other Visual Media. In 2006, Adams was inducted into the Canadian Music Hall of Fame. In 2011, he received a star on the Hollywood Walk of Fame.