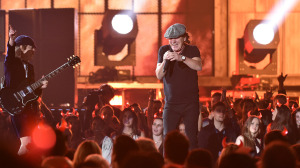 Last night, heavy metal icons AC/DC ignited the 57th Annual Grammy Awards with an explosive two-track medley. The band performed their new hit single “Rock or Bust” and their iconic smash “Highway To Hell”, leaving the all in attendance absolutely Thunderstruck. AC/DC brought the entire Staples Center to it’s feet, and music superstars from all genres, including the likes of Blake Shelton, Tony Bennett, Lady Gaga, Paul McCartney (The Beatles), Jamie Foxx, Pharrell Williams, and others. Disgraced rapper Kanye West, however, was not shown during the performance, but he’s a prick so no one really cares.

The performance marked the second coming of drummer Chris Slade and guitarist Stevie Young, who has stepped in to fill the shoes of his uncle Malcolm Young who sadly retired from the band last spring due to illness. While it was somewhat heartbreaking to watch AC/DC without Malcolm or founding drummer Phil Rudd, the band still delivered like they always have for the last four decades. Slade hammered away on the kit like it was 1990, and Brian Johnson’s vocals loud, searing, and on point. Lead guitarist Angus Young rocked his classic schoolboy outfit and ran around stage with reckless abandon. The lyrics to the band’s new single are all too perfect – “In rock we trust, it’s rock or bust.”

Pop queen Katy Perry, who just performed at the Super Bowl Half Time Show and was slated to perform later on at the Grammys, threw up some devil horns and headbanged for the camera while Foo Fighters frontman Dave Grohl was caught in a euphoric moment singing all the lyrics he grew up listening to. It was an amazing testament to rock ‘n’ roll, the genre that is often overlooked by the Grammys. It proved that everyone loves good old-fashioned kick-ass rock ‘n’ roll. 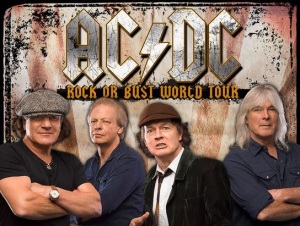 Rudd amid his ongoing legal issues for the band’s two music videos, Slade is the obvious choice for the band in the long-term. Slade was a member of AC/DC from 1989-1994 and played drums on their 1990 album The Razor’s Edge. The album hit #2 on the Billboard Top 200 and contains some of the band’s biggest hits. To date, the disc has sold over 5 million copies in the U.S. alone. Slade also appears on the band’s 1992 live effort AC/DC Live. While best known for his stint with AC/DC, Slade as also performed with the likes of Asia, Gary Numan, Manfred Man’s Earth Band, Terra Nova, Bloodstock, David Gilmore, Uriah Heep, Gary Moore, Tom Jones, The Firm, Damage Control, and others. The band recently announced the first round of tour dates for their 2015 Rock or Bust World Tour. The worldwide trek will begin with a European leg that kicks off on May 5 at the Gelredome in Arnhem, Netherlands. More tour dates and festivals are set to be announced around the world in the coming weeks. 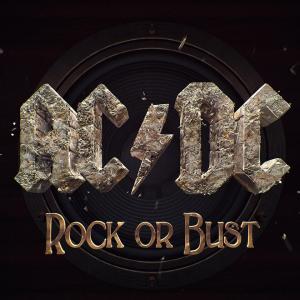 AC/DC’s new disc Rock or Bust (Columbia Records) just debuted at #3 on the Billboard Top 200. Stevie Young, nephew of lead guitarist Angus Young and former rhythm guitarist Malcolm Young, makes his debut with the band in the video. Stevie played rhythm guitar on the new album and will tour with the band in 2015 in place of Malcolm who sadly retired from the band due to illness. The new album was produced by Brendan O’Brien and mixed by Mike Fraser, both of whom worked on the band’s previous effort Black Ice. The disc debuted at #1 on the Billboard Top 200 and sold over 784,000 copies in it’s first week of sales. It was one of only two albums the band released that decade (Stiff Upper Lip, 2000). The disc garnered the band the Grammy Award for Best Hard Rock Performance for the track “War Machine”. AC/DC are undeniably one of the greatest music artists of all time. To date, the band has sold over 200 million albums worldwide and have produced some of hard rock and heavy metal’s biggest anthems.  – by Matt Bishop (Top Left Photo Courtesy of John Shearer/Invision/AP)