Under Coverta with John Moyer (and Russell Allen) of Adrenaline Mob 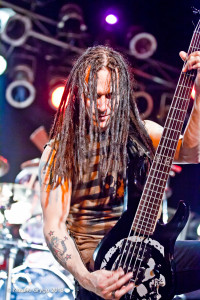 After a brief break since the release of their unbelievable debut album, Adrenaline Mob are back. In the wake of the release of their covers album, Coverta, The Mob are out on their first full U.S. tour as a band. On the day of our interview, it had been exactly 1 year, 3 days since the debut record’s album release show at the Hiro Ballroom in New York City. It was also the first time that John had played with the band. When I asked John about this tour thus far, he replied, “Its been great,” John stated. “This is a great band. We didn’t even rehearse for the first gig. We just showed up, jumped on stage, hadn’t played together in seven months, and had a killer show.”

Since had been so long since releasing any material, Adrenaline Mob wanted to give fans a little something to snack on during this tour. “We weren’t quite ready to go into the studio and write a bunch of original new songs yet,” John said. “And, we really didn’t feel that Omerta had gotten it’s day in the sun yet.” The band is just now really starting to push the record’s first single, “Come Undone”. Adrenaline Mob is certainly firing on all cylinders right now, proving they can write some of the best original hard rock the industry has seen in years, and properly paying homage to rock legends while putting their signature stamp on it.

One of the band’s cover tunes was particularly special for John to record as a bassist. The band 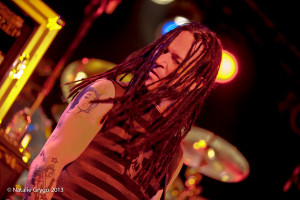 recorded “The Lemon Song” by Led Zeppelin, one of the legendary band’s top hits. “John Paul Jones as the bass player for Led Zeppelin, that’s [“The Lemon Song”] one of his amazing moments. He had many amazing moments, but that song in particular is a massive walking bass line. He never plays the same thing twice. It’s a total melodic, beautiful thing.” So, how did John approach the task? “I did my best to cover it perfectly.” Doing the song and John Paul Jones justice meant a lot to John as a musician. “I worked harder on that one song than I did some albums. I spent so much time meticulously making sure that every note was right where it needed to be. One of my crowning achievements is my performance on “The Lemon Song” on the Coverta EP.”

Towards the end of our conversation, frontman Russell Allen decided to make a special guest appearance. “We’re really enthusiastic about our future, and this covers [album] of course was really a great experience for us,” Russell stated about the band’s current status.  “People are responding well to it, both the original artists and the fans.” Russell was very proud of all the band has accomplished in such a short time, and very focused on where the band is headed. 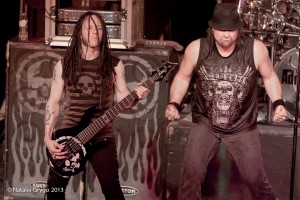 Adrenaline Mob is composed of some of hard rock’s best musicians. Each member has contributed significantly to the genre over the last 20 years. Former long-time Dream Theater drummer Mike Portnoy is behind the kit for the Mob. Portnoy is arguably the best drummer in the world right now, and is widely regarded as one of the best all-time. His list of accomplishments and awards is long, including being Revolver Magazine 2011 Drummer of The Year, and will defend his title in April at Golden Gods Awards in April. Guitar virtuoso Mike Orlando is an insane shredder. Coming from his solo band, Sonic Stomp, Orlando was a Top 10 Finalist in Guitar Player Magazine’s Superstar of The Year in 2008. Vocalist Russell Allen of Symphony X fronts the group with a killer range and larger-than-life persona. The final piece of this metallic puzzle is none other than John Moyer. One of the best bassists in rock today, Moyer joined Adrenaline Mob in light of Disturbed‘s hiatus. Moyer’s three Disturbed albums all debuted at #1 on the Billboard Top 200, and the band received a Grammy Nomination in 2008. He has his own line of custom B.C. Rich Havoc basses, and his own personally designed amps and cabinets from Kustom Amplification. Adrenaline Mob will be hitting South America in June with Grammy Award winners Halestorm, and more festival announcements are coming soon. The Mob still rules. – by Matt Bishop (Photography by Natalie Grygo)

Welcome to the Revival of rock 'n' roll music. The way you used to hear rock, see rock, and feel rock is going to be shattered into a million pieces, reassembled, and revived. Dive into the realm of rock with interviews, concert coverage, and breaking news that make the music seem real again - in your ears, in your mind, and right in front of your very eyes. You'll feel the cool steel of the guitar strings and the smooth wood grain of the drum sticks right in your hands, all with the echoes of reverb in your head. This is the way rock was supposed to be experienced. Welcome to the Revival of rock 'n' roll music.
View all posts by Matt Bishop →
Tagged  Adrenaline Mob, Coverta, John Moyer, Omerta, Russell Allen.
Bookmark the permalink.