Home » Touring with The Pain – Redlight King at Uproar Festival 2012

Touring with The Pain – Redlight King at Uproar Festival 2012 Festival days are a grind, and at Uproar Festival this year I caught up with a band that has been grinding it out on almost all the major U.S. festivals this year, Redlight King. After a long tour run that included stops at Carolina Rebellion, Rocklahoma, Rock On The Range, the band has hopped on board for this year’s Uproar tour. “All the bands are excited to be here,” said Kaz. “There’s good comradery…good brothership.” The guys also added that the catering was really good, which I had been hearing a lot of. Hats off to the Uproar caterers!

When discussing their current record, I asked how the band went about writing a record; do they have a certain sound in mind, or do they just go into the studio and see what happens? “I think its a combination of all those things,” Jules stated. “Sometimes we’ll sit down and it’s a lyrical idea that comes first, and sometimes it’s a guitar riff.” Kaz added, “It’s whatever feels good. The songs themselves are about the human condition.”

Redlight King are still touring over a year after the release of their debut album, 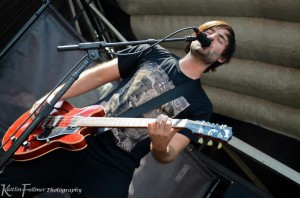 Something For The Pain, on Hollywood Records. The album hit #15 on the U.S Rock Chart, producing three hit singles. After Uproar Festival, the band is heading to Europe for a 14-day run in support of fellow Uproarers Shinedown. Upon their return, the band is heading into the studio to start pre-production on their next album in early November, beginning the recording process in December. Merry Christmas, Rock Revivers! – by Matt Bishop (Photos Courtesy of Kaitlin Follmer (Amped Up Aperture Photography)