The last time I talked with Maria Brink, we were at Rock On The Range back in May, and In This Moment had just released their new single, “Blood”. Fast forward to Uproar Festival, and their new album, Blood, is out now at #15 on the Billboard Top 200. “We’re so excited, we’ve been doing this for a really long time…everything that we’ve envisioned for ourselves is happening,” Brink stated.  When I asked if the band had a feeling that the album was going to be successful commercially, Maria replied, “We had a feeling right when we wrote ‘Blood’ that something was happening…” 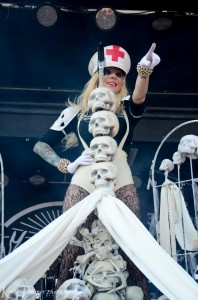 As far as Uproar goes, Maria and the boys are stoked to be part of the tour. “We love summer festivals,” Brink stated. “We love the energy and the wild people.” Another reason the band likes the festivals is the exposure. Maria and I discussed how fans of all walks come together at these major festivals and discover new music. “A lot of people don’t know who we are, but they know our new songs.” Because of the success of their new album, fans are discovering In This Moment at festivals like Uproar, and then back-tracking through the band’s old albums.

In This Moment are no stranger to commercial success. Their last two albums, 2008’s The Dream and 2010’s A Star-Crossed Wasteland, hit #73 and #40 respectively on the Billboard Top 200. Throughout their career, the band has toured relentlessly, partaking in Ozzfest, Warped Tour, Rock On The Range, Download Festival, Mayhem Festival, and supporting Rob Zombie and Ozzy Osbourne on their 2007 U.S. Tour. Post-Uproar, the band will be setting sail on ShipRocked 2012, plus a huge tour announcement that Maria could not yet unveil! She did assure me that In This Moment would be touring for a long time on this record, so get ready to spill some blood. – by Matt Bishop (Photo Courtesy of Kaitlin Follmer (Amped Up Aperture Photography)

Touring with The Pain - Redlight King at Uproar Festival 2012