After a year of touring, Trivium are still making tremendous waves in the music world. This summer, the band toured on the Trespass America Festival. I caught up with bassist Paolo Gregoletto towards the end of the run to talk about the tour and the band’s upcoming plans. “The tours’ been excellent,” Paolo said. “We’re all getting pretty tired, but all the shows have been great. You get up there, and the show just rejuvenates you.” 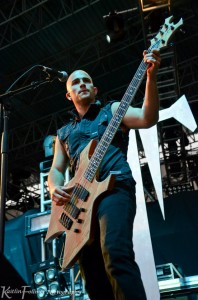 In the recent months, Trivium has begun work on it’s next album. “We have about 12 demos,” Paolo revealed. “We’re hoping to have about 20 songs ready to go by the UK/Europe tour – we’re gonna start rehearsing on the tour.” Paolo also reaffirmed that the album is going to be heavier and angrier than previous Trivium outings. We went on to discuss the upcoming album in more detail, talked about the state of metal in pop culture, and more.

Trivium’s latest album, In Waves, is out now on Roadrunner Records, and debuted at #1 on The Billboard Top 200 and #1 on the Billboard Hard Rock Chart. In Waves is the evolution of heavy. It’s a balanced record on which the band showcases all their strong points; mixing heavy, shredding riffs and beautiful melodies. Back in the spring, the band released another single off the album, entitled “Black”. Having just wrapped up a quick South American run, Trivium are currently touring the UK, and then on to the rest of Europe until Thanksgiving. Get your tickets and make waves while you can, ’cause when the holidays come, into the studio they go. – by Matt Bishop (Photos Courtesy of Kaitlin Follmer (Amped Up Aperture Photography) 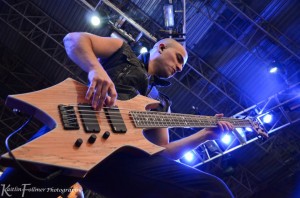 Touring with The Pain - Redlight King at Uproar Festival 2012