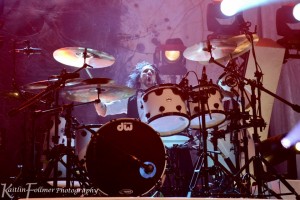 Volume and heaviness await all who dare to enter the House of Gold & Bones. I was more than willing to enter, as I showed up to witness the kick-off stop of Stone Sour‘s 2013 House of Gold & Bones Tour. To make the evening even more epic, it was all going down in none other than my hometown of Bethlehem, PA. It was only fitting that I got a chance to sit down with a fellow Lehigh Valley man, drummer Roy Mayorga of Stone Sour, backstage at the Sands Event Center. Roy lived just a few minutes away over in Whitehall for a few years, and his mother actually still lives there. It was a privilege to sit down with him and talk about Part 1 of Stone Sour’s next chapter.

“Well, for me, I’m very excited not just to kick off 2013 with this tour here in the States, but the fact that we’re kicking it off in an area I used to live in,” Roy said. “I used to live in the Lehigh Valley…I lived in Whitehall.” In this worldwide entity we call the music industry, it’s always cool to cross paths with someone from you’re hometown. I grew up just a Stone’s throw away (pun intended) from Whitehall in Nazareth, both of which are right next to Bethlehem where the show was taking place that night.

Now, as far as this tour goes, it’s the band’s U.S. run in support of their latest album, The House of Gold & Bones: Part 1. The disc is 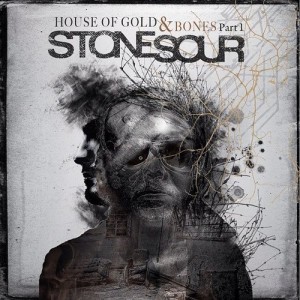 the first of a tw0-part concept album, with the sequel expected to drop later this spring in April. In regards to the fan’s response to the new record, Roy said, “So far, so good. I’m stoked. I’m really happy with the way the record came out.” As far as the double album concept, the band intended on releasing both albums at the same time. “At first, we were going to actually put them both out at the same time, but then we thought it would be easier to separate them,” Roy stated. “We had plenty of songs, they happened to work out great, and now we have two albums.” Both albums are based on a story-line written by frontman Corey Taylor. A comic book adaptation of the story will be released via Dark Horse Comics this spring. The first edition of the four-part miniseries is due out April 17.

A band like Stone Sour is no stranger to the hit charts. With four studio albums under their belt, their are plenty of singles and fan favorites to choose from when it comes time to make a setlist. In regards to this task, Roy said, “We just take the best of every record and compile it to make a decent set list that makes everybody happy.” He added, “Each year, the set is getting longer and longer ’cause we have more records, and that’s fine with me. It keeps the energy up!” Roy’s favorite song off the new album? “Right now, love ‘A Rumor of Skin’. I love playing that live. It’s a cool tune.” 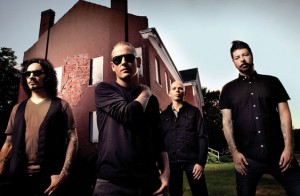 Stone Sour released their 4th album, House of Gold & Bones: Part 1, back in October. The album’s lead single, “Absolute Zero”, hit #1 on Active Rock Radio. The album debuted at #7 on the Billboard Top 200. The sequel, House of Gold & Bones: Part 2, will be released in the spring of 2013, with a tentative timetable set for April. With only 4 albums under their belt, Stone Sour have sold over 4 million albums worldwide. Their self-titled debut and sophomore effort, Come What(ever) May, were both certified gold. Their third album, 2010′s Audio Secrecy, debuted at #6 on the Billboard Top 200. The band has been nominated for three Grammy Awards through the course of their career. Stone Sour just kicked off a U.S. tour, which concludes on February 17. From there, it’s off to Australia for the monstrous Soundwave Festival. In between dates, the band will support Linkin Park on their Australian headlining shows. After bringing the thunder to the Down Under, Stone Sour will keep busy into the summer and beyond with festival dates all around the world, including Rock On The Range, which was just announced today. – by Matt Bishop (Top Left Photo Courtesy of Kaitlin Follmer Photography, Bottom Right Photo Courtesy of Stone Sour/RoadrunnerRecords)