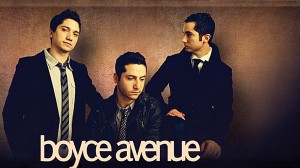 Boyce Avenue are back at it with the release of their latest cover video – “Name” by the Goo Goo Dolls. This is not the first time Boyce Avenue has covered them, with renditions of “Iris”, “Slide”, and more, under their belt. This Goo track, however, is certainly long-overdue and very welcomed. It’s an acoustic song to begin with, and arguably the Goo Goo Dolls trademark song. With the dueling guitars and Alejandro’s soaring vocals, this is Boyce at their best.

Boyce Avenue have received an astonishing 830 million-plus hits, on their YouTube page, making them the second most-searched artist on YouTube behind Linkin Park. The band as over 2 million Subscribers to their page as well. The band began to draw attention to themselves by the incredibly well-done cover songs they started posting on their YouTube Channel (Boyce Avenue Channel). They did acoustic versions of hit pop songs, put their signature spin on rap and hip-hop songs, and even re-wrote a few (e.g. ”Teenage Dream” by Katy Perry, which Alejandro re-wrote from a male perspective).

Brilliantly, the band began to sprinkle in original songs here and there. Since posting their first YouTube video, the band has released two full-length original LP’s and one single, ”Every Breath”. The band’s first album was released on their own label, 3 Peace Records. The band signed with Universal Republic Records to release their second album, and major-label debut. Both have sold very well on iTunes, along with their cover songs. Wishing to be independent again, the band re-released their debut LP, All We Have Left, on their own label. – by Matt Bishop