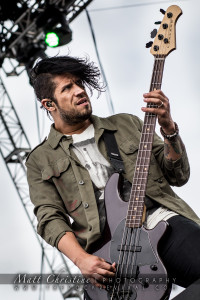 I can’t believe it’s been this long, but Southern California rockers Papa Roach closing in on 20 years together as a band. Frontman Jacoby Shaddix has made it a point to tell audiences this at all the band’s recent shows. For a guy who remembers watching the video for their breakout hit “Last Resort” on MTV’s TRL back in 2000, it’s great to see the band enjoying some of the best success of their career in the wake of their seventh studio album, The Connection. I got a chance to catch up with bassist Tobin Esperance and drummer Tony Palermo backstage at Carolina Rebellion 2013 to talk about the new record, the tour, and much more.

“It’s been a lot of fun,” said Palermo of the band’s tour. “We’ve been doing a lot of these [festival] types of things, in addition to our own headliner stuff. Just doin’ our thing.” Esperance added, “Havin’ fun, seeing our friend, and playing music.” The band is currently riding the wave of their newest album. The Connection. Debuting at #17 on the Billboard Top 200, Papa Roach expanded their sound this time around and incorporated some different elements. Some say it’s the best outing of the band’s career. “I think we made a really good, cohesive rock record,” said Esperance. “It was quite a process making the record, there was a lot of turbulence, but that makes for the realness attached to it.”

Papa Roach exploded onto the mainstream scene in 2000 with their major label debut, Infest, which 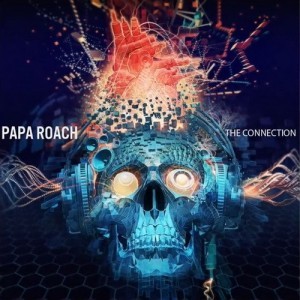