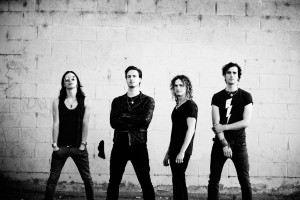 One of the highlights of Carolina Rebellion 2013 was certainly the UK’s Heaven’s Basement. In the wake of the release of their debut album, Filthy Empire, the band has brought their furious rock ‘n’ roll show to the States for a ton of touring and festival appearances. Just 2 days before The Rebellion, Heaven’s Basement headlined the Revolver Golden Gods Awards After-Party in Los Angeles. Bassist Rob Ellershaw stated right off the bat, “Dude, it was amazing,” in reference to their set that day at The Rebellion. Despite bad weather, the band still put on a killer rock show and the fans downright dug it. The band has a lot of touring planned for the coming months, with a new single on the way as well. With the entire heavy music genre being a bit watered-down at times, a band like Heaven’s Basement is a welcomed breath of fresh air.

Heaven’s Basement are in the forefront of the next generation of pure hard rock. Since their formation in 2008, they have toured all 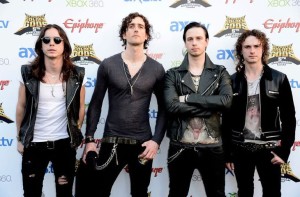 over Europe with the likes of Bon Jovi, Papa Roach, Shinedown, Buckcherry, Theory of A Deadman, Tesla, Halestorm, Black Stone Cherry, and more. Their festival resume is an impressive one, with appearances at Bloodstock Open Air, Sonisphere, Download Festival, Rock On The Range, Carolina Rebellion, and more. In 2008, the band released their debut self-titled EP. After lots of hard touring, the band returned to the studio and released the Unbreakable EP in 2011. That same year in addition to their touring, the band played the main stage at High Voltage Festival in London alongside Judas Priest, Slash, and Dream Theater. In 2012, the band finally hit the states, opening for fellow UK hard rockers The Darkness at Club Nokia in Los Angeles, CA. They went on to support Seether on a full US/UK tour, and in February 2013, they released their debut full-length LP, Filthy Empire, to rave reviews. – by Matt Bishop