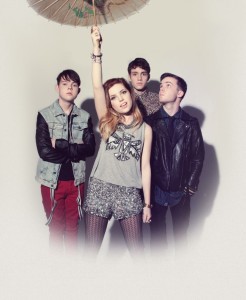 Up-and-coming alt-pop rockers Echosmith have been one of the talks of the town this year on Warped Tour 2013. Like a lot of bands on Warped, Echosmith was only slotted for the first half of the tour. However, due to the overwhelming response to them. The young Los Angeles-based quartet has announced the release of their debut album, Talking Dreams, out October 1 via Warner Bros Records. The band recently premiered the music video for the album’s title track, directed by Clea DuVall, on Alternative Press.

Echosmith is comprised of the Sierota siblings – Jamie (vocals/guitar), Sydney (vocals/keyboard), Noah (vocals/bass), and Graham (drums). They recorded their debut LP with producer Mike Elizondo (Tegan and Sara, No Doubt, Maroon 5), who signed them to Warner Bros. with WBR chairman and fellow producer Rob Cavallo. The band grew up on music, and draw their influences from artists like Coldplay, The Smiths, U2, Joy Division, and Fleetwood Mac. Although still newcomers, the band has been receiving effusive early praise. Alternative Press selected them as one of their “100 Bands To Watch in 2013,” Seventeen called Sydney’s voice “stunning” and MTV recently declared them a “Buzzworthy Obsession.” After Warped Tour, Echosmith will head out for a string of dates with Owl City, and will remain on the road through the fall. In addition to touring on the Vans Warped Tour this summer, the band will be playing a few select dates with The Summer Set and Owl City once again. – by Matt Bishop

*with Owl City
**with The Summer Set