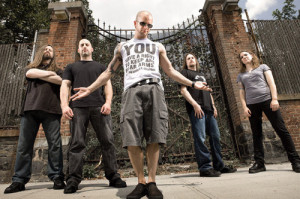 All That Remains formed in 2000, and released their debut album, Behind Silence and Solitude, in 2002. The band’s third album, The Fall of Ideals, was released in 2006 via Prosthetic Records and gave the band their first mainstream hit, charting at #75 on the Billboard Top 200 and selling over 13,000 copies in it’s first week of sales. The band played Ozzfest 2006 and emarked on their own headlining tour with support from Chimiara and Black Tide. Before returning to the studio in 2008, the band took part in Vans Warped Tour. The band released their fourth album, Overcome, that same year and toured that summer on the Rockstar Energy Drink Mayhem Festival. In 2010, All That Remains released their most successful album to date, For We Are Many, which debuted at #10 on the Billboard Top 200 and sold over 29,000 copies in it’s first week on the market. The band toured that year with Hatebreed and Five Finger Death Punch on the Share The Welt Tour.

All That Remains are still touring off their 2012 effort, A War You Cannot Win, which hit #13 on the Billboard Top 200. The band has been  hitting the global festival circuit hard this summer, playing Rock On The Range, Carolina Rebellion, Rocklahoma, and Rock Fest in the U.S., Graspop Metal Meeting in Belgium, Mair 1 Festival in Germany, and more. They will also be supporting Volbeat and Stone Sour on their individual headlining tours in-between festival appearances. In late August, All That Remains will join Volbeat, HIM, and Airbourne on the 2013 Rock Allegiance Tour, which kicks off on August 23 in St. Paul, MN. – by Matt Bishop