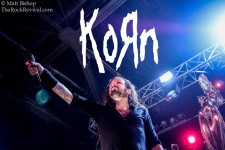 Nu-metal godfathers Korn have begun the first leg of their 2013 Paradigm Shift Tour. The exclusive run kicked off last night at The Electric Factory in Philadelphia, PA. The 9-date trek are the first shows in support of their upcoming album, The Paradigm Shift, which drops on October 8 via Prospect Park Records.… Continue reading

Alt-metal legends Korn have announced initial dates for their upcoming tour in support of their new album, The Paradigm Shift. It is the band’s first album since 2011’s groundbreaking effort, The Path of Totality, which hit #10 on the Billboard Top 200 and won the award for Album of The Year at the 2011 Revolver Golden Gods. This… Continue reading