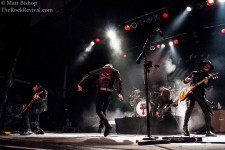 Hard rockers Buckcherry have premiered their new music video for “Dreamin’ of You”, the latest single off their album, Confessions. The disc came out just over a year ago, and is the sixth studio effort of the band’s career released via Century Media Records. Buckcherry broke away from their whiskey-drenched party rock anthems for… Continue reading