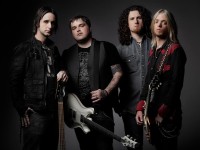 Southern hard rockers Black Stone Cherry have officially announced their new album, which they have openly been working on for months now. Titled Magic Mountain, the disc is due out on May 6 via Roadrunner Records just in time for festival season. The album’s lead single, “Me and Mary Jane”, is… Continue reading