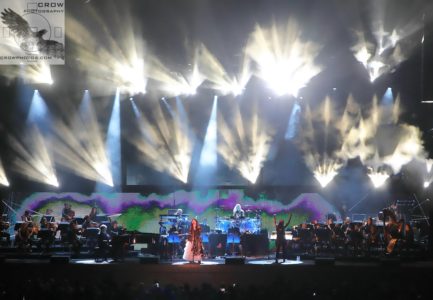 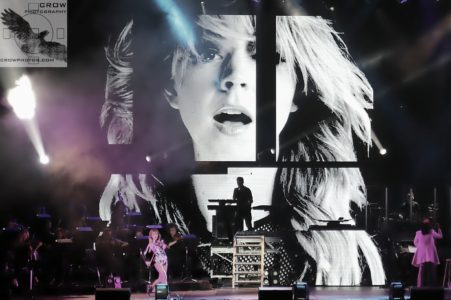 Lindsey opened the show with sheer awe and excitement with her violin acrobatics, yes… violin acrobatics, which is her specialty craft of playing the violin combined with her sport of dancing performance art! There was an entire orchestra filling the stage, and massive video screens full of creative images. Lindsey, along with her dance crew and awesome choreography, put on quite a show to say the least! 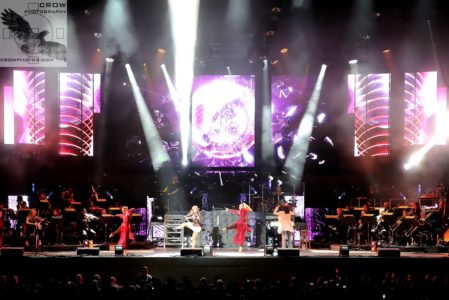 Lindsey also spread heartfelt messages throughout her performance giving insight into her career path, and sharing her stories about following your dreams, addressing fears, and fighting depression with positivity and self love, which yields so much happiness and makes a big difference in this world. She was very humble and has been an Evanescence fan girl since 2004. She is so proud of herself to be where she is today, which was so inspiring to the fans of all ages in attendance at this event. 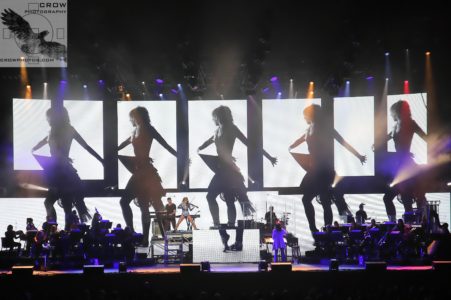 Lindsey is a true performer and gave the audience a mind, body, and soulful experience with her insight, her athleticism — body rolls and leg kicks in tandem with her violining… her dance sport and musical feats combined in one ebb and flow was totally epic and simply an ah-mazing form of artistry! 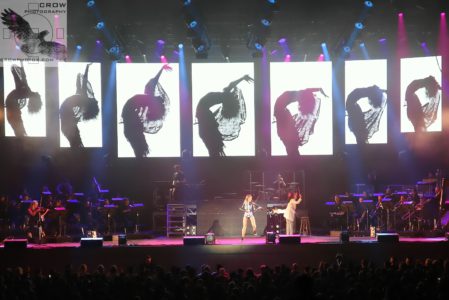 Lindsey’s set list included pop, rock, and electronica incorporating snippets from her Crystallize video and it’s powerful messages, Phantom of the Opera medleys, and a cover of Lana Del Rey’s “Young and Beautiful”. The highlight of the evening was when Amy Lee joined Lindsey on stage for a performance of “Shatter Me” that was reminiscent of a Cirque du Soleil show. It would be amazing for them to team up to record a full album and perform the entire set together.

The local San Diego orchestra stayed in place as Amy Lee, Evanescence’s operatic piano playing songbird, turned the Mattress Firm Amphitheatre into a powerhouse with all of these artists performing in sync. When Amy introduced the orchestra, she told the audience that they are a special group of local musicians per city, and they don’t go on road with them… so impressive as the beats harmonized right on like they had been playing together forever! 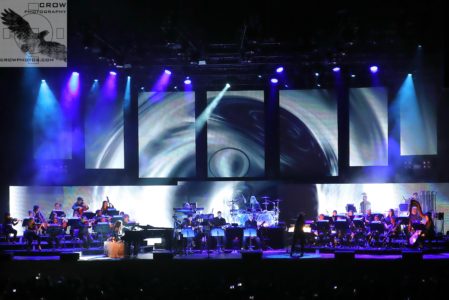 Evanescence still has a full rock band, but the sound is mixed to blend equally with the orchestra. The band released “Synthesis” in 2017, a reimagining of past hits as orchestral pieces, with a couple of new songs mixed in. This gave the live performance an entirely different feel, with Amy’s soaring vocals the most prominent feature of the lush arrangements. 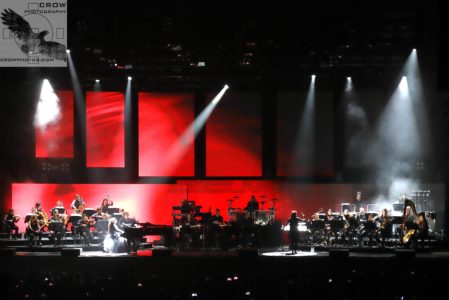 Amy expressed gratitude and thanked her fan base for allowing her 20 years of doing what she loves – being a singer, songwriter, and pianist. It had been a long time since she was in San Diego and she shared heartfelt messages about breathing, facing pain, hearts, and struggles. 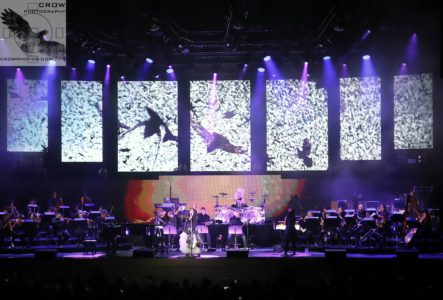 The sixteen song setlist included a cover of The Beatles “Across the Universe”, a duet with Lindsey Stirling – “Hi-Lo”, and an encore of “No More Tears” / “Alive”, an Ozzy Osbourne / Sia mashup with Lindsey Stirling. All of the tracks made it such an outstanding show and this tour definitely brought classy to San Diego yet again. As this tour continues, it is a must see in a town near you!

See below for a slideshow of Evanescence and Lindsey Stirling at Mattress Firm Amphiteater in Chula Vista, CA on August 31, 2018: