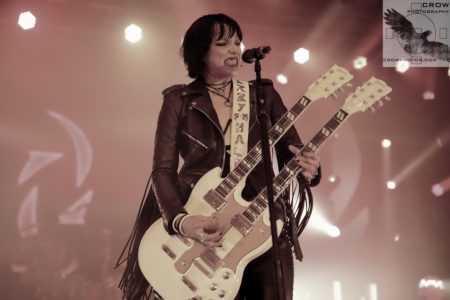 Halestorm and In This Moment wrapped up their co-headlining tour in Funner, California, an appropriately named location, as they giddily rocked the Harrah’s Resort SoCal in Valley Center, California, on August 24, 2018 with New Years Day supporting. 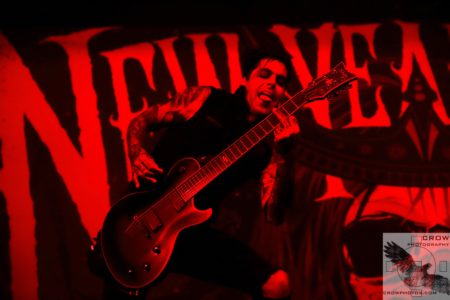 New Years Day opened the concert with excitement as this show was not only the last show of this tour but SoCal is their home and they hadn’t played locally in a long time. Home is where the heart is and Funner, CA was the place to be to instantaneously feel the love and rocking energy of this night. 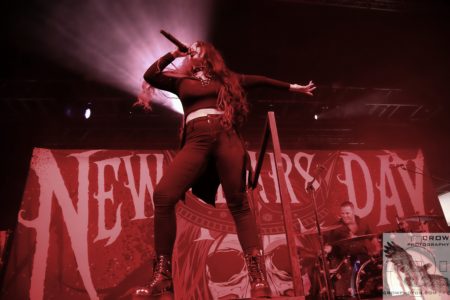 Ashley “Ash” Costello gave props to the metal community and thanked the audience for supporting metal, then paid special tribute to Vinnie Paul by covering Pantera’s “Fucking Hostile”. The crowd definitely pleased the metal gods with their heartfelt response. 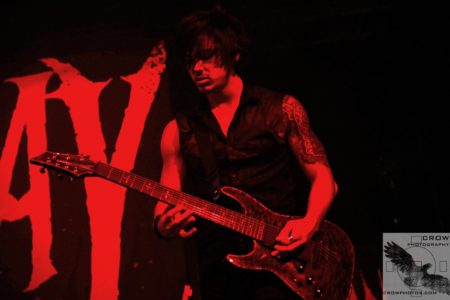 New Years Day performed old and new hits, engaging the crowd with their “Diary of a Creep” tour. Ash prefaced new song “Disgust Me” about just being yourself, even if you are not perfect, not beautiful, or simply feel disgusting. Ash made sure the crowd was having a good time. The “Epidemic” chorus “We’re so contagious” had the crowd rocking. 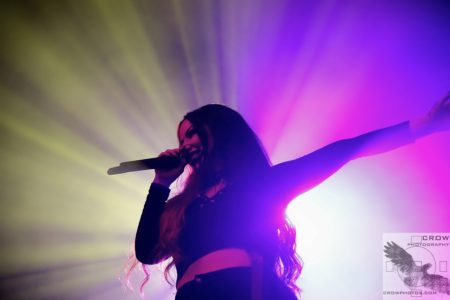 Being the last show of this tour, gratitude and giddiness was in the air amongst jokes and pranks with the stage literally coming down around them as the stage crew disassembled their stage props and drum kit while they ended their set with hit “Defame Me”, presumably at the direction of Halestorm. 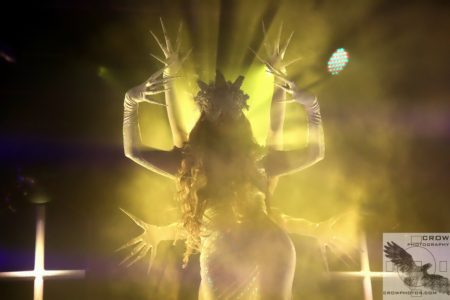 Co-headliner In This Moment kept the love and respect going with a musical tribute to recent loss of soul sister Aretha Franklin, by playing her legendary song “Respect” over the PA before dropping the curtain on their set. 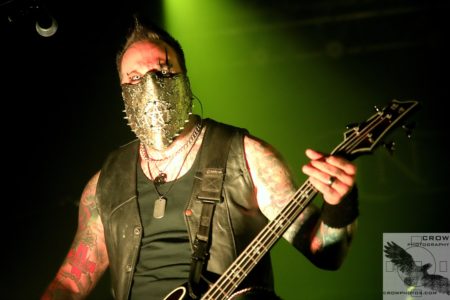 In This Moment hit the stage with their rocking performance on “The Witching Hour” tour, in full force from the get go with a grand performance of theatrical arts. Maria Brink is a legend in the making herself and watching her perform her artistry live on stage is quite an epic experience. The theatrics combined with their heavy metalcore music exuberates both darkness and light with so much drama at the root base unfolding right in front of your eyes… causing you to be truly in the moment of the show. 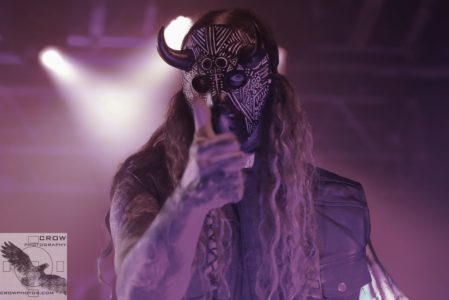 Amongst the dramatics though, happy vibes were flowing on the stage and it was truly a special night in Funner, CA, with a special birthday tribute to guitarist Randy Weitzel. Maria acknowledged him with a cake lit up with candles and engaged the crowd along with the band to sing him the “Happy Birthday” song… it was a very sweet moment. 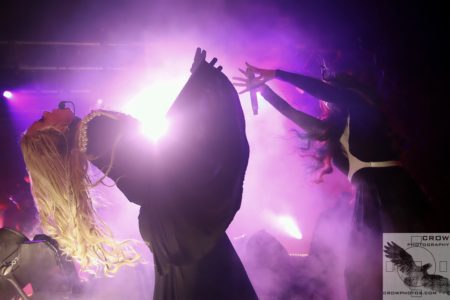 While Maria and Ash prepared for their duet of “Black Wedding”, the band kept the vibes flowing with guitar and drum solos. Although this song is about sacrifices, there was no loss surrounding this downtime of heavy beats. 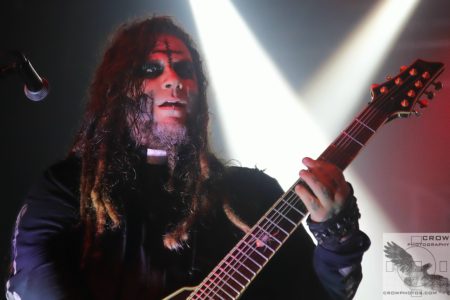 ITM’s cover of Phil Collins’ “In The Air Tonight” was a perfect choice and totally complemented the set. From the costume changes to the dancers, to the guitar and drum solos, to the full setlist of songs, it was an ebb and flow of a musical drama and such an awesome experience for the audience. 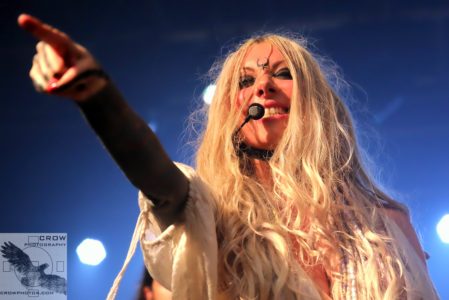 The set ended with dramatic performance of “Whore” which was a true show of artistry with shame signs, red gowns, red crosses, whore hat, and a sin box to set the stage. It is a song about rising above the haters and the message was received loud and clear by the audience. Maria ended the show with requests to be kind to each other and have a good time, which was definitely the end result of that night. 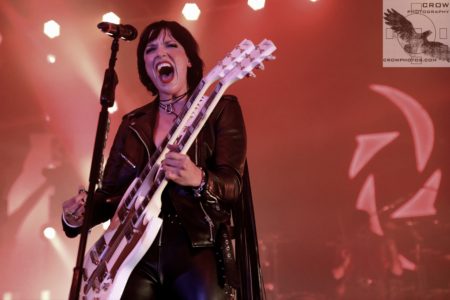 Co-headliner, Halestorm, kicked off their show in the usual badass Lzzy Hale way, and the “Vicious” tour is like a strong, rough, tough and powerful yet calming storm given the inspiration, success, and love surrounding the band. Watching Halestorm perform is special given the band’s roots and sibling connection. 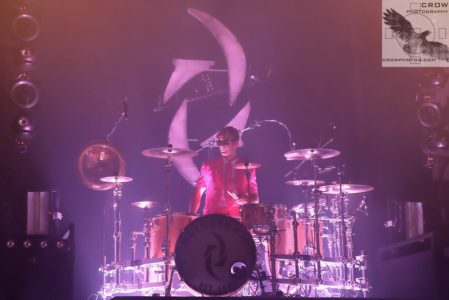 Performing old and new hits, they played a full setlist and three encores, including “I Get Off” as an acapella intro to the new sexy hit, “Do Not Disturb”, adding lustry soul to the night. 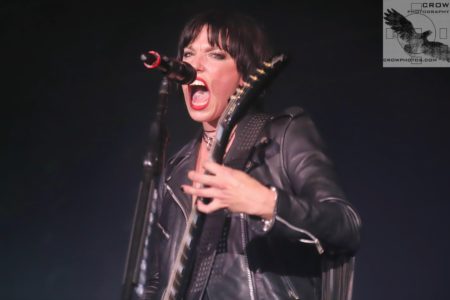 Although Lzzy is a total badass and likes to get heavy in her Pat Benatar/Joan Jett kinda way, she also has a soft side and included one acoustic love song, “The Silence” from the new “Vicious” album, which balances out the “what doesn’t kill me, makes me vicious” perspective and forward thinking. 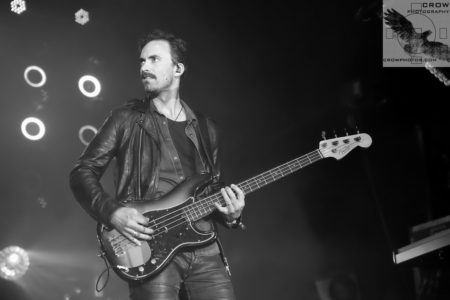 Arejay put on an amazing drum solo in his usual way and for newcomers it was simply jaw dropping. His drumming skills are just as badass as Lzzy’s heavy strumming so the show was an awesome jam session at epic levels to say the least! 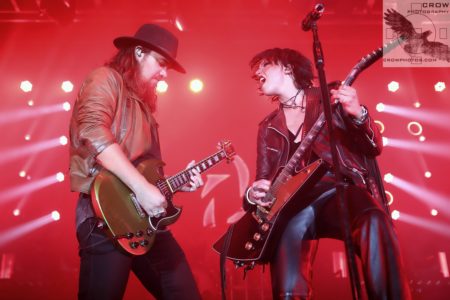 Lzzy told the audience that she is proud to be a woman musician on stage right now. She wants females to follow their hearts and never let anyone tell you that you can’t do whatever it is you want to do. 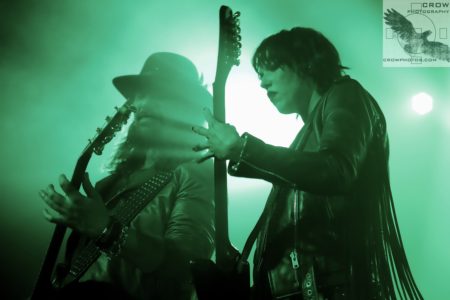 Lzzy also expressed gratitude to her fans, especially for driving miles to the SoCal show making Funner, CA, so much more fun. Since this was the last stop of this tour, the show ended with more jokes and pranks, as New Years Day got revenge on Halestorm by toilet papering the band members during the encore. All 3 bands came out on stage at the very end, acknowledging each other and having a celebratory send off toast… for the fans, it was a great cheers to the special night and happy ending in Funner, CA!

For a slideshow of photos of Halestorm at Harrah’s in Funner, CA see below:

For a slideshow of photos of In This Moment at Harrah’s in Funner, CA see below:

For a slideshow of photos of New Years Day at Harrah’s in Funner, CA see below: