This summer’s Rockstar Energy Drink Uproar Festival line-up has been announce. The late summer trek, which kicks off  August 9 and runs across North America through September 15, 2013, will be headlined by Alice In Chains, Jane’s Addiction, and Coheed and Cambria. This year’s line-up also features Circa Survive, Danko Jones, Walking Papers (featuring Duff McKagan), Middle Class Rut, New Politics, Chuck Shaffer Picture Show, and the local Ernie Ball Battle Of The Bands winner in each market. “I think it’s going to be a fun tour and we’re really looking forward to it. It’s only going to happen that one time, that way, and you’re going to be there,” says Alice In Chains guitarist Jerry Cantrell. When I interviewed Coheed and Cambria guitarist Travis Stever a few weeks ago at the The Electric Factory in Philadelphia, PA, he said that while he couldn’t reveal any specific details at the moment, the band was very excited about some festivals this summer.

Alice In Chains have enjoyed much success in recent years since their reformation in 2005. After playing a series of 1-offs with special 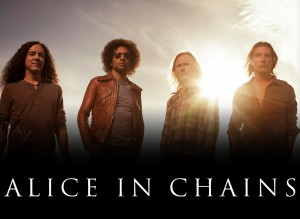 guest vocalists, the band officially reformed with new vocalist William DuVall in 2008 and entered the studio to begin work on a new album. Much like contemporaries Soundgarden, it had been 14 years since AIC’s last studio effort. In 2009, Black Gives Way To Blue was released to much fan praise and critical acclaim. The record hit #5 on the Billboard Top 200, and garnered the band two Grammy Award nominations. Alice In Chains were one of the most successful music acts of the 1990s, selling over 25 million albums worldwide throughout the decade. In 1992, the band released sophomore album, Dirt, which was critically acclaimed and has been certified quadruple platinum. Two of the band’s albums, Jar of Flies and Alice in Chains, both hit #1 on the Billboard Top 200. In total, Alice In Chains have received eight Grammy Award nominations throughout their career. The band will be dropping a new album in 2013. The record’s first single, “Hollow”, was released back 0n December 18, 2012. The new album is due to drop on May 28. 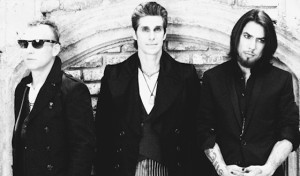 Jane’s Addiction are no stranger to the rock festival scene. In 1991, frontman Perry Farrell founded Lollapalooza, a touring festival that was originally conceived as Jane’s Addiction’s farewell tour. The festival toured every summer until 1997, and it was revived in 2003 as a single weekend festival in Chicago. It remains today as one of the oldest and biggest festivals in the U.S. Jane’s Addiction brought their fresh brand of alternative rock to the mainstream in 1988 with their debut LP Nothing’s Shocking. In 1990, the band’s sophomore effort, Ritual de lo habitual, put them in the forefront of rock music. It hit #19 on the Billboard Top 200, and eventually went triple platinum. After one year of touring, concluding with the first Lollapalooza, the band called it quits. Jane’s Addiction reunited in 2002, and released Strays in 2003. That same year, Perry Farrell brought back Lollapalooza. The album hit #4 on the Billboard Top 200. After Strays, the band took another break, only to return again in 2011 with a new LP, The Great Escape Artist, which hit #12 on the Billboard Top 200. The band has been touring ever since in support of the record, and the band has openly discussed doing a follow-up album in connection with The Great Escape Artist. The band actually recorded more material for the album than was released initially. Only time will tell if the plans for a new album come to fruition.

supported Heaven & Hell (Ronnie James Dio and members of Black Sabbath) on their The Devil You Know Tour. The band also took part in the Austin City Limits Festival, Wacken Open Air, Sonisphere, and Lollapalooza. In April 2010, Coheed released their 5th studio LP, Year of The Black Rainbow. The album served as a prequel to the bands first four albums, further defining the story of the Armory Wars upon which all Coheed and Cambria albums are based. It peaked at #6 on the Billboard Top 200. Frontman Claudio Sanchez wrote a novel to accompany the deluxe version of the album. Between 2011 and 2012, Coheed and Cambria took seven months to record their new album, The Afterman. The second double-album of their career, the first record was released in October 2012, entitled The Afterman: Ascension, which debuted at #5 on the Billboard Top 200. It’s counterpart, The Afterman: Decension, followed in February 2013. The albums concentrate on the character Sirius Amory, from the Amory Wars saga. The band is currently on the second U.S. leg of The Afterman World Tour. After this run, the band is headed New Zealand, Southeast Asia, the U.S. (again), and more. Plus, there’s a few big festival gigs that the guys are keeping under wraps for now, but will be announced in the imminent future. by Matt Bishop