Rock News
by Matt Bishop
November 26, 2018March 19, 2022
(TRR) – The Sonic Temple lineup is here. After the announcement that Rock On The Range would be no more, hard music fans in America were left wondering what was to happen next. Festival promoter Danny Wimmer Presents quickly announced their new project – Sonic Temple Art + Music Festival. Wimmer himself confirmed that the event would still be a “rock music” festival, but possibly featuring a broader range of acts.

The inaugural lineup is set, and it does not disappoint. Foo Fighters, System of a Down, and Disturbed will headline the three-day jaunt next spring. Other featured acts include Bring Me The Horizon, Ghost, and a rare U.S. performance by The Prodigy. Also on the stellar bill are Lamb of God, Chevelle, The Struts, Meshuggah, Parkway Drive, Killswitch Engage, Black Label Society, The Fever 333, Beartooth, The Glorious Sons, Palaye Royale, Black Pistol Fire, and more.

System of a Down guitarist Daron Malakian‘s band Scars On Broadway will perform, and guitarist Tom Morello (Rage Against The Machine, Audioslave, Street Sweeper Social Club) will play a solo set.

“I am so proud of what we accomplished with Rock On The Range, and we couldn’t have done it without our partnership with AEG,” said Danny Wimmer. “When we started Rock On The Range, there was no other festival in America quite like it but recently it became clear that we had different visions of where to take the festival next. The city of Columbus and our devoted rock fans deserve a one-of-a-kind, world-class festival, and that is exactly what Sonic Temple Art + Music Festival will bring to MAPFRE Stadium.”

“Similarly, DWP will welcome a new festival in North Carolina this spring at a new location in the city of Rockingham that will allow us to go all night in a more European style setting. We will be announcing that festival’s name and exact location soon. We are also looking forward to bringing back Chicago Open Air better than ever and continuing to build on the record setting pace of Welcome To Rockville.”

The Sonic Temple Music + Arts Festival takes place at MAPFRE Stadium in Columbus, OH on May 17-19. Tickets go on sale this Friday, November 30, at 12pm EST via SonicTempleFestival.com. 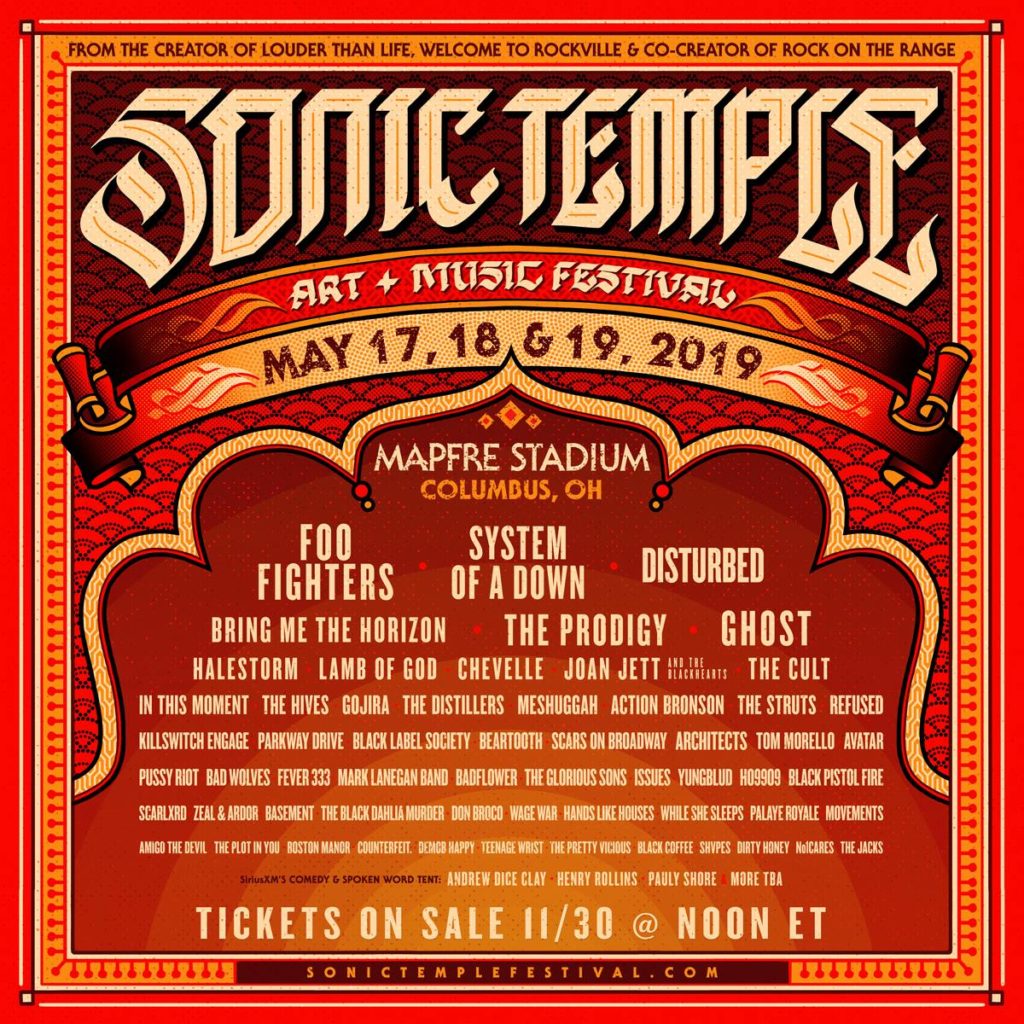 Danny Wimmer Presents Teases Sonic Temple Art + Music Festival Line-up! Could It Be System Of A Down?