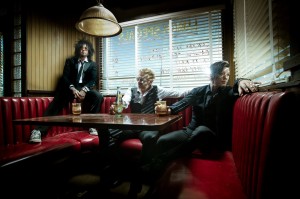 Sixx:A.M. have unveiled the official music video for their new single “Stars”, the first track from their new album Modern Vintage. A few weeks ago, the band announced their first-ever headlining tour of the U.S. The trek kicks off on April 8 at The Regency Ballroom in San Francisco, CA and wraps up on April 29 at The Fillmore in Silver Spring, MD. Drummer Jeff Fab (Black Label Society, Filter) has joined the band for the tour. Support for the tour will be provided by Apocalyptica. The new disc is the follow-up to the band’s 2011 effort This Is Gonna Hurt which hit #10 on the Billboard Top 200. Bassist and founder Nikki Sixx states, “Like our favorite bands from the 1970s, Sixx:A.M. is rooted in songwriting, musicianship and lyrics – three core elements that helped to define that era. Sixx:A.M. has taken even more pages from this book on ‘Gotta Get It Right’ and the rest of Modern Vintage, having hopefully created a record that demands to be discovered again and again.” Sixx is currently on The Final Tour with Mötley Crüe. The band just played their last North American show.

Guitarist DJ Ashba has also been keeping busy touring the world with Guns N’ Roses.  “’Gotta Get it Right’ is a great example of how Sixx:AM has set out to celebrate the music that has influenced us over the years and we truly feel we’ve made a genre defying album with Modern Vintage,” Ashba said. Frontman James Michael adds, “On the first two albums, Sixx:AM established a musical freedom that few bands get to enjoy. ‘Gotta Get It Right’ is clearly a birth child of that creative freedom and an exciting next step for us as our goal was to create something which confounds both expectation and categorization.” – by Matt Bishop

Welcome to the Revival of rock 'n' roll music. The way you used to hear rock, see rock, and feel rock is going to be shattered into a million pieces, reassembled, and revived. Dive into the realm of rock with interviews, concert coverage, and breaking news that make the music seem real again - in your ears, in your mind, and right in front of your very eyes. You'll feel the cool steel of the guitar strings and the smooth wood grain of the drum sticks right in your hands, all with the echoes of reverb in your head. This is the way rock was supposed to be experienced. Welcome to the Revival of rock 'n' roll music.
View all posts by Matt Bishop →
Tagged  DJ Ashba, gotta get it right, Guns N' Roses, jeff fab, modern vintage, motley crue, nikki sixx, rock revival, sixx:a.m. new music video, sixx:a.m. stars, TheRockRevival.com.
Bookmark the permalink.