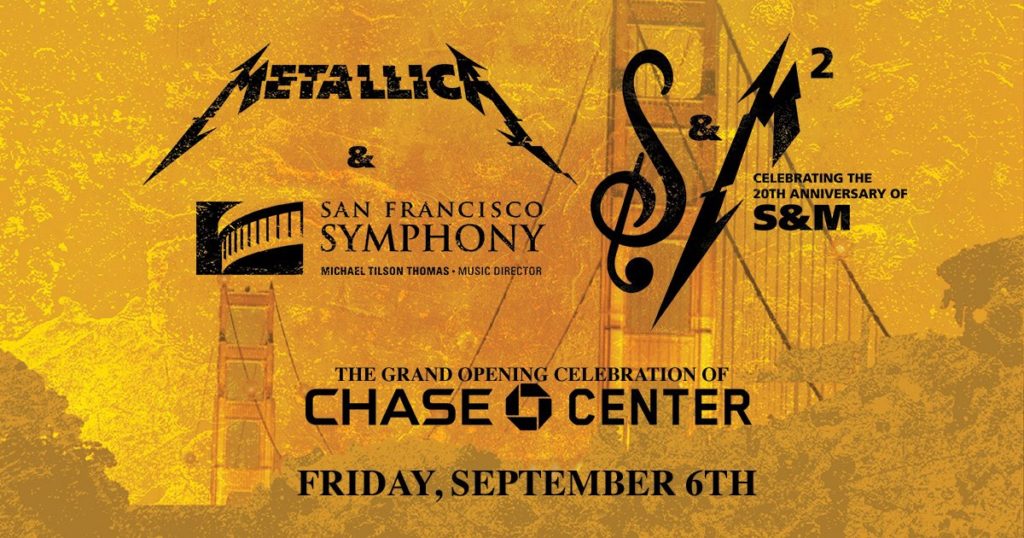 (TRR) – Metallica are set to perform at the grand opening of the all-new Chase Center in San Francisco. On Friday, September 6, the metal titans will reunite with the San Francisco Symphony for a special 20th anniversary performance of S&M. The S&M² performance will kick off SFS Musical Director Michael Tilson Thomas’ last season at the orchestra’s helm.

“Check this out, you know how much we love firsts,” Metallica said in a statement. “We are always extremely proud to wave the flag for our hometown of San Francisco, so this first is particularly exciting as we announce that we will be performing at the grand opening celebration of the Chase Center with S&M² on Friday, September 6th. That’s right, not only will this be the inaugural event at the new arena in the city, but we will be playing once again with the San Francisco Symphony Orchestra as we join together to commemorate this historic addition to the Bay Area and mark the 20th anniversary of the S&M concerts and album release.

Please join us for this one-night-only show as we celebrate the addition of what is sure to become a cultural landmark in the Bay Area. We’re thrilled to be invited to be a part of it and humbled to be sharing the stage with the legendary MTT and the city’s finest musicians in the San Francisco Symphony”

Chase Center is a 18,064 seat sports and entertainment arena, set to open in the Fall of 2019, which will anchor an 11-acre mixed use privately financed complex in San Francisco’s Mission Bay neighborhood. Chase Center will play host to the Golden State Warriors basketball organization, concerts, cultural events, family shows, and more, totaling nearly 200 events a year. The sports and entertainment district will include two office buildings and 29 unique retail locations, along with 3.2 acres of publicly accessible plazas and open space.

Composer and conductor Michael Kamen conducted the San Francisco Symphony when they performed with Metallica at the original S&M concerts in 1999. The shows were recorded and subsequently released as a double-live album. Kamen, who had been diagnosed with multiple sclerosis in 1997, died tragically from a heart attack in 2003 at the age of 55.

Released on November 23, 1999, Metallica’s double live album S&M was recorded on April 21-22 at the Berkeley Community Theatre in Berkeley, CA. The album peaked at #2 on the Billboard Top 200. To date, it has sold nearly 9 million copies worldwide.