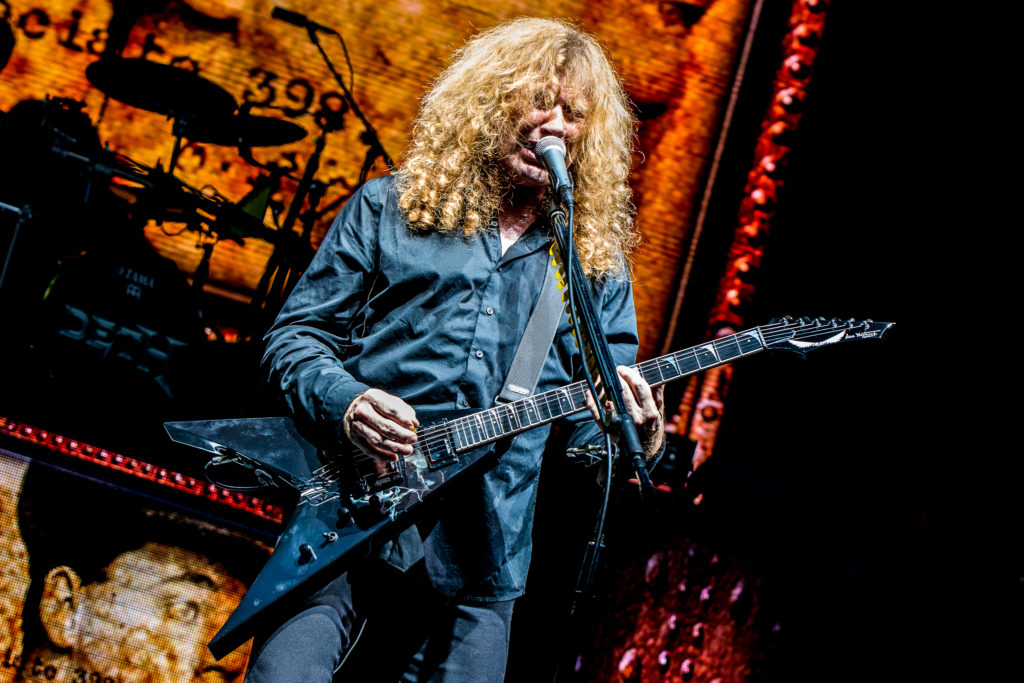 “I have a lot, a lot, a lot of gear. I’ve got a lot of double-neck guitars, I’ve got a lot of prototype stuff. I’ve got absolutely killer collector’s item stuff for the right guy,” Mustaine says. “For me, my job is to put everything I can into this guitar so that when it gets put in somebody else’s hands, I can say, ‘This is the guitar that wrote “Holy Wars.”‘”

Among the items that will be for sale in the Reverb shop are 20 of the thrash metal legend’s signature guitars, including a 1987 Dean Dave Mustaine Signature Holy Grail V (#1 of 33), a Signature Zero Korina (#10 of 50), a 2007 Signature Silver V prototype, a Signature Silver Burst VMNT, and a Signature Stealth VMNT that was used extensively for touring.

“I have always believed when it comes down to memorabilia with a band—especially instruments—I want to pass this onto people. I want them to be able to have something that I had,” he says. “When I die, I don’t want a guitar in my coffin. Some of these guys want to be buried with stuff—I don’t want to die. I want to live forever.”

“As far as the gear is concerned, there’s a lot of small detailed stuff that we have in our storage. Stuff that goes back to the very beginning of the band,” Mustaine says.

“When you’ve been playing and touring for as long as I have, you tend to amass quite a collection of gear,” he says. “They’re great instruments and they represent more than 40 years of playing—but I’ve got more than I could possibly use myself. I owe so much to my fans—if it wasn’t for them, I wouldn’t even have all this gear. I’d rather give it back to them than let it sit and collect dust.”

While you can hear Mustaine talk all about his Official Reverb Shop in the video at the top of this page, you can also watch an extended interview we did with Mustaine. Check it out to hear the secret behind his early sound, his thoughts on amp modeling, what record he’d play if he colonized the moon, and more.

This article originally appeared on Reverb.com

Welcome to the Revival of rock 'n' roll music. The way you used to hear rock, see rock, and feel rock is going to be shattered into a million pieces, reassembled, and revived. Dive into the realm of rock with interviews, concert coverage, and breaking news that make the music seem real again - in your ears, in your mind, and right in front of your very eyes. You'll feel the cool steel of the guitar strings and the smooth wood grain of the drum sticks right in your hands, all with the echoes of reverb in your head. This is the way rock was supposed to be experienced. Welcome to the Revival of rock 'n' roll music.
View all posts by Matt Bishop →
Tagged  dave mustaine, gear, guitars, megadeth, reverb, tech.
Bookmark the permalink.