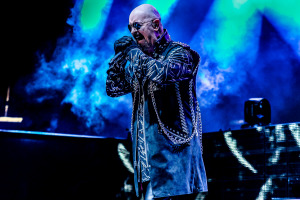 Metal gods Judas Priest have announced a 2015 European tour. This time, they’ll be bringing very special guest Five Finger Death Punch. Priest and FFDP are at the top of their respective metal generations, and this is certainly a powerful tour package. The trek kicks off on June 4 at the Icehall in Helsinki, Finland and wraps up on June 27 at the Arena in Lodz, Poland. Judas Priest frontman Rob Halford made a special guest appearance on Five Finger Death Punch’s “Life Me Up” from The Wrong Side of Heaven and The Righteous Side of Hell Volume 1 which debuted at #2 on the Billboard Top 200 last year. Halford joined FFDP for a performance of the song at the 2013 Revolver Golden God Awards.

Judas Priest are nearing the end of their massive U.S. arena trek with Steel Panther. The band’s new disc 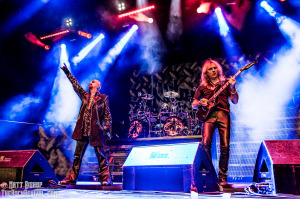 Redeemer of Souls dropped back on July 14 in the UK via Columbia Records and July 15 in the US via Epic Records. It debuted at #6 on the Billboard Top 200, giving Judas Priest their first Top 10 album in America. The record is the much-anticipated follow-up to the band’s 2008 double concept album Nostradamus. The band proceeded to tour the world in support of the record from 2008-2009, which included a Metal Masters run with Heaven & Hell,  Motörhead, and Testament. After touring in support of Nostradamus, founding guitarist K.K. Downing retired from the band in 2011. This new album will be the band’s first studio effort to feature new guitarist Richie Faulkner, who toured with the band on their Epitaph Tour from 2011-2012. Faulkner has had some big shoes to fill, but he’s risen to the occasion and helped Priest keep their signature double-ax attack. Part of the New Wave of British Heavy Metal, Judas Priest are widely considered godfathers of traditional heavy metal music. To date, the band has sold over 50 million albums worldwide. In 2010, the band garnered the Grammy Award for Best Metal Performance. 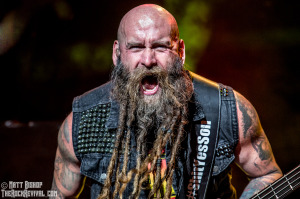 This past spring, Five Finger Death Punch hit the festival circuit in the U.S. with several appearances including a stop at Rock On The Range in Columbus, OH. The band is touring in support of their latest effort, the monster double-LP The Wrong Side of Heaven and The Righteous Side of Hell – Vol. 1 and Vol. 2. Both discs debuted at #2 on the Billboard Top 200 back in July 2013 and November 2013 respectively. The band recently toured on last year’s Australia’s Soundwave Festival, followed by a sold-out European tour. Five Finger Death Punch won Song of The Year and bassist Chris Kael won the Paul Gray Best Bassist Award at this year’s Revolver Golden Gods in Los Angeles. Throughout their young career, Five Finger Death Punch have sold almost 3 million albums in the United States.– by Matt Bishop 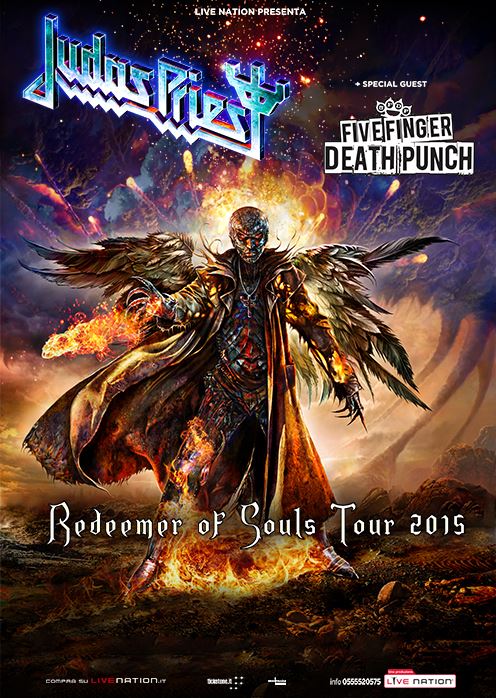 Welcome to the Revival of rock 'n' roll music. The way you used to hear rock, see rock, and feel rock is going to be shattered into a million pieces, reassembled, and revived. Dive into the realm of rock with interviews, concert coverage, and breaking news that make the music seem real again - in your ears, in your mind, and right in front of your very eyes. You'll feel the cool steel of the guitar strings and the smooth wood grain of the drum sticks right in your hands, all with the echoes of reverb in your head. This is the way rock was supposed to be experienced. Welcome to the Revival of rock 'n' roll music.
View all posts by Matt Bishop →
Tagged  five finger death punch 2015 european tour, five finger death punch 2015 tour dates, hard rock, heavy metal, judas priest 2015 european tour, judas priest 2015 tour dates, judas priest europe 2015, judas priest ffdp tour, judas priest five finger death punch, metal, music news, rob halford, rock revival, TheRockRevival.com.
Bookmark the permalink.