After releasing several teaser clips of new songs over the last few months, Foo Fighters have finally premiered a lyric video for “Something From Nothing”, the first official single from their upcoming album Sonic Highways. The album is due out on November 10 via RCA Records, and is a cornerstone of our Fall Albums Preview. This week, the band has been holding court on The Late Show with David Letterman for a week-long residency. Highlights of the week so far include collaborative performances with Zac Brown and Heart. 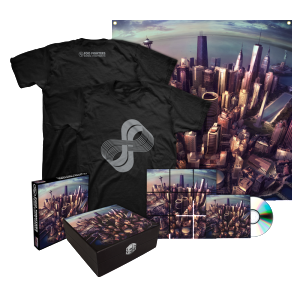 In addition to CD and MP3, Foo Fighters’ new album will be released on special edition 180g vinyl in an assortment of nine different gatefold covers including eight different themes; one for each of the cities in which the album was recorded: Austin, Chicago, Los Angeles, Nashville, New Orleans, New York, Seattle, and Washington, D.C. All the covers can be viewed in the gallery below. The vinyls will be made available in a variety of bundles, including a grand package of a Sonic Highways vinyl, CD, flag, t-shirt, and puzzle all in a beautiful wooden box. Foo Fighters are set to headline Life Is Beautiful Festival in Las Vegas on October 26 and Voodoo Experience in New Orleans on October 31. In 2015, the band will embark on a tour kicks off on January 15 in Santiago, Chile and wraps up on January 31 in Bogotá, Colombia. The band’s HBO original series Sonic Highways premieres tonight at 11pm EST. – by Matt Bishop

OTHERWISE PREMIERE NEW MUSIC VIDEO FOR "DARKER SIDE OF THE MOON"