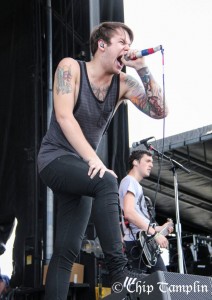 Metalcore giants Attack Attack! have recently announced a huge line-up chance that includes the departure of vocalist Caleb Shomo and founding member, bassist John Holgado. The band has already replaced Shomo and Holgado with vocalist Phil Druyor, formerly of I Am Abomination, and bassist Tyler Sapp.

Back in December, Holgado announced via Instagram that he would be selling all of his basses and leaving Attack Attack! to take care of his health and focus on his battle with depression and anxiety. Holgado also stated that he has left the band on good terms. Upon his departure, Shomo tweeted,  “What a crazy day. Real proud of John and his bravery. Love that man, been my best friend since I was 14.” In a letter to fans, Shomo cited the reason for his depature as a “horrible battle with clinical depression.” He also stated in the letter how much love he has for the guys in AA, and that he is leaving on good terms. It is still unclear whether or not Shomo’s departure is directly related to Holgado leaving the band, but one can only assume it played at least a small role in the decision.

I caught up with Caleb for an interview back in May 2012 at Rock On The Range. He seemed 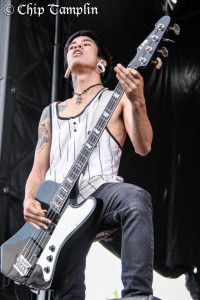 excited in general about touring, and the band’s new album, which I consider to be their best outing yet. We talked a lot about the band’s new stripped-down approach to their music, and his new vocal techniques. I wish Caleb and John all the best in returning to good health. Hopefully we’ll see them both back playing music in the future.

The new Attack Attack! have already released a new song, “No Defeat”, via Alternative Press Magazine. The band is currently working on their 4th studio album, their first since their departure from their record label, Rise Records. Attack Attack!’s third studio release, This Means War, peaked at #11 on the Billboard Top 200. The band headlined the Vans Warped Tour in 2011, and just got off a world headlining tour with Escape The Fate. The band toured this past summer with We Came As Romans on the Scream It Like You Mean It Tour. – by Matt Bishop (Photos – Top Left, Caleb Shomo and Bottom Right, John Holgado – Courtesy of Chip Tamplin)