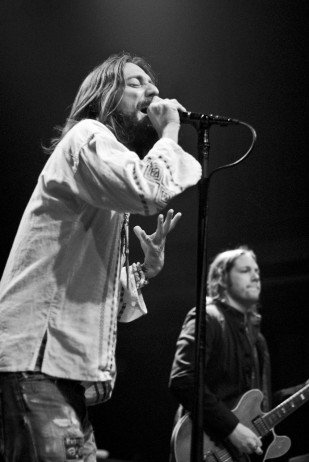 American rock favorites The Black Crowes have announced that they will be touring in 2013. The worldwide trek begins in late March in the UK, and continues through May in New Orleans, LA, with more dates to be announced in the coming weeks. It’s the band’s first tour in 2 years. The last time the band played was a series of nine festival shows throughout Europe in July 2011. The band will be touring in support of a new live vinyl release, Wiser For The Time, which is due out March 19 via Silver Arrow/Megaforce Records. The monster four-vinyl set will contain 26 songs (15 acoustic, 11 electric) from the band’s five-night, sold-out New York City performances in the fall of 2010. The albums will also be available as a double album digital download.

The Black Crowes formed in 1989 in Atlanta, Georgia. Their debut album, Shake Your Money Maker, catapulted them to mainstream success. The album hit #4 on the Billboard Top 200, and spawned two #1 singles: “Hard To Handle” and “She Talks To Angels”. Their sophomore effort, The Southern Harmony and Musical Companion, hit #1 on the Billboard Top 200 in 1992. In 2008, they band released the album Warpaint which hit #5 in the Billboard Top 200. In 2010, they celebrated their 20th anniversary with the release of their greatest hits album, Croweology, and a tour to support. To date, The Black Crowes have sold over 30 million records and have been ranked #92 on VH1’s 100 Greatest Artists of Hard Rock. Throughout their 23-year career, they have toured with the likes of Robert Plant (Led Zeppelin), Heart, ZZ Top, Aerosmith, Tom Petty & The Heartbreakers, Dave Matthews Band, The Grateful Dead, and more. They have also been joined on-stage by Oasis and Jimmy Page (Led Zeppelin). The band played two shows with Jimmy Page in New York and Los Angeles. The Los Angeles concert was recorded and released as a double live album, entitled Jimmy Page & The Black Crowes – Live at The Greek. – by Matt Bishop (Photo Courtesy of Rod Snyder/MSO PR)

The Black Crowes 2013 Law Down With Number 13 Tour