Arena RockFeaturesHard RockRock
by Kristyn Clarke
February 19, 2019March 19, 2022
(TRR) – Last night, metal titans Disturbed and special guests Three Days Grace rocked a near-capacity crowd at Wells Fargo Center in Philadelphia, PA. We can’t help but feel that the Evolution Tour is the absolute perfect way, to sum up just how far a band like Disturbed has come in their career. The band’s latest album release Evolution (Reprise/Warner Bros. Records) is their seventh studio album, and has more than proven that the band are showing no signs of slowing down. Each LP has further proven shown just how much the band has matured over the years.

But we have to note that looking back to the release of Disturb’s debut album The Sickness back in 2000 they have also managed to maintain the same level of raw energy and aggression within their music and are able to show the world that if we all band together as a family and use music as weapon against all that tries to hold us down then we can overcome nearly anything life throws our way.

Once frontman David Draiman takes the stage, he immediately commandeers the audience and leaves us hypnotized from beginning to end. We were also thrilled that during the band’s set on this tour long time band members bassist John Moyer and drummer Mike Wengren got some time to shine giving us two incredible solos and further showcasing their stellar musicianship. Of course, let’s not forget to guitarist Dan Donegan who can shred with the very best of them blows us away every time.

It seems like over the last few years we have sadly witnessed an alarming amount of loss within the rock world with the tragic deaths of both Chester Bennington, Scott Weiland and of course Chris Cornell and only recently we just lost Pantera/Hellyeah legendary drummer Vinnie Paul and throughout their career Disturbed has shared the bill with all of these artists. We can’t even begin to imagine their grief at losing their friends and fellow musicians in ways that may have been prevented.

During their set, Disturbed paid an amazing tribute to those taken from us too soon with a heartfelt performance of “Hold On To Memories” with various images from throughout their career flashing on the large screen behind the stage. The song was followed by a message from Draiman reminding everyone that help is out there and showcasing the phone numbers for both the drug abuse and suicide prevention hotlines. The band continued their moving tribute by relocating to a B-stage donned with small wooden benches and candles in the back of the arena to perform “A Reason To Fight” and “Watch You Burn.” The band then made their way back to the main stage to play a gorgeous rendition of their haunting cover of the Simon & Garfunkel classic “The Sound Of Silence” complete with fog effects and a flaming piano. It was without a doubt a visual spectacular. They then kept the visuals going with flames falling down from the ceiling lighting up the entire stage when they broke into “Indestructible” and “Inside The Fire” to close out the main set.

Over the course of the evening, we heard many fans in the audience around us reminiscing about their favorite memories of seeing both Disturbed and show openers Three Days Grace live, as well as, the early music of both bands. It made us truly realize just how huge of a music catalog there is for both of these bands. Many fans talking about their dream set list and we can say with certainty that they were not disappointed by either band on the Evolution Tour.

The crowd was amped and ready to rock and Three Days Grace was the perfect choice to kick things off into high gear. Once they took the stage they never once slowed down and the crowd went absolutely wild for songs such as “Pain,” “Break,” “Animal I’ve Become,“ and of course their showstopper “Riot.” We haven’t seen that many mosh pits and crowd surfers in the Wells Fargo Center for years and gosh, was it a refreshing sight to see.

Both Three Days Grace and Disturbed did a wonderful job of engaging the audience and several times throughout their sets both bands ran right out into the crowd to get up close and personal with fans and we adore seeing that kind of connection taking place.

We overheard one guy in the audience in front of us complaining during Disturbed’s set that Draiman’s speech about those we have lost as being a downer and it made us want to throw him down in the mosh pit. People need to understand that more awareness needs to be made to these kinds of situations and we think that Disturbed is doing a fantastic job of doing their part and sending out the message to the masses. We were all incredibly moved, except that guy, we guess! Ah, well, you can’t win em’ all. The band’s big focus was on ways to evolve and using music as a weapon to unite has always been a big theme for the band and it rings truer today than ever before. What we took away from this show was Disturb’s message of hope and unity and amazing stage theatrics and Three Days Grace’s addictive energy. That’s not to say that Disturbed has slowed down, but back in their younger days it was raw aggression and now it has become slightly toned down, but we feel that comes along with maturity as a band. There is a different type of intensity pouring forth from Disturbed. They continue to “evolve,” hence the Evolution album and tour, and it is working out beautifully for them.

The Evolution Tour for us was like taking a walk down memory lane, especially with the early material from both bands and as Draiman pointed out –  music is the fiber that connects us to certain points in our lives and we truly feel a sense of family and belonging while watching these two amazing bands perform. The show exceeded our expectations and was an incredibly moving and visually spectacular night. 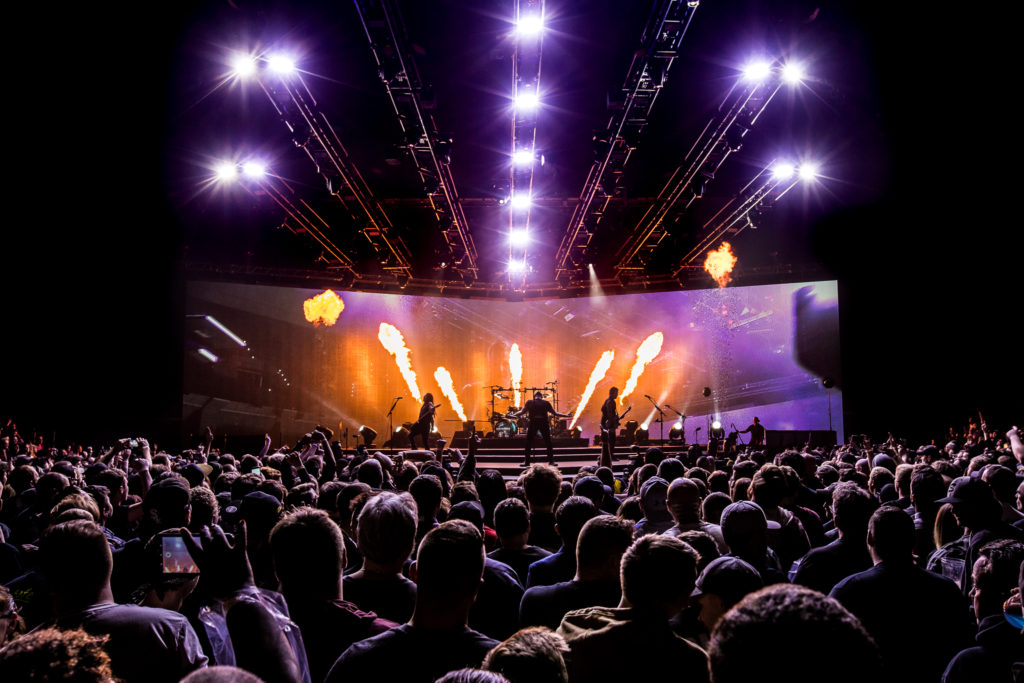