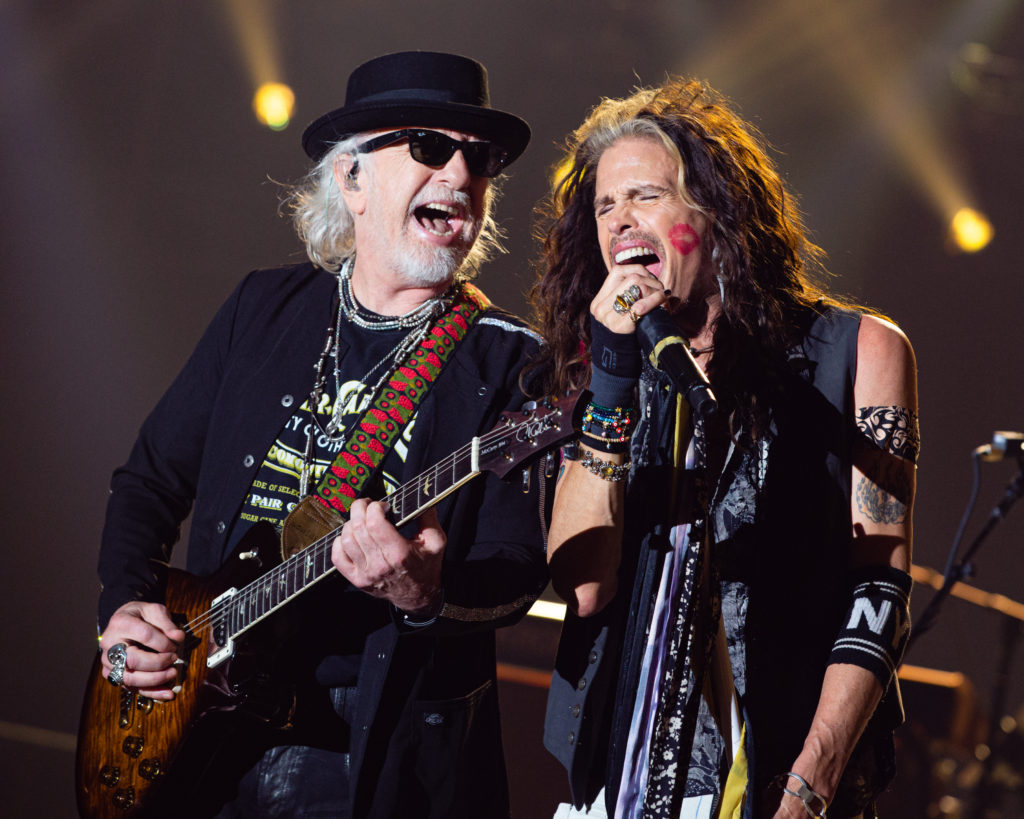 (TRR) – On Sunday night at the Borgata, rock icons Aerosmith wrapped up a two-night stand in Atlantic City, NJ. The sold-out performance was full of huge hits and some deep cuts. The shows are a part of the band’s east coast run of their landmark Las Vegas Deuces Are Wild Residency, which debuted at the Park Theater at Park MGM back in April.

Throughout the weekend, fans had access to special Deuces Are Wild merchandise at the Borgata. Also available were special items including vintage-style t-shirts by MadeWorn, vinyl records signed by the whole band, and much more. The show is proceeded by a documentary-style video, which features rare photos and footage, commentary from the band members, shout-outs from celebrity fans, and more.

The show got off to a running start with “Train Kept A-Rollin’,“ the band’s heavy cover of the Tiny Bradshaw tune that first appeared on their 1974 outing Get Your Wings. The heavy riffage continued, as they launched right into their 1993 banger “Eat The Rich.“ Lead guitarist Joe Perry‘s tone was loud and aggressive, and helped set the tone for the evening ahead.

Next, “Rag Doll” jazzed things up with Joey Perry ripping on a slide guitar. Perry, and fellow axman Brad Hamilton, were letting it loose all night with dazzling guitar work.

A great version of the fan favorite “Last Child” from their acclaimed Rocks album was certainly one of the show’s highlights. Brad Whitford took the lead. It is quite possibly Aerosmith’s most ciminally underrated song, the super-groovy riff is always a treat to hear live. 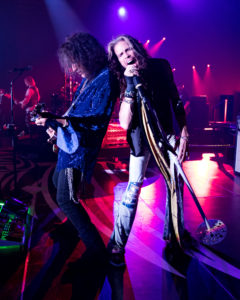 Only five songs in, Aerosmith unleashed the crown jewel of their entire catalogue – “Sweet Emotion.“ After frontman Steven Tyler introduced Mr. Sweet Emotion himself, bassist Tom Hamilton lead the band into the track with his smooth, iconic intro.

The Bad Boys from Boston slowed things down a bit midway through the set with performances of rare gems “Hangman Jury” and “Seasons of Wither.” For these two tracks, Tyler and Perry sat at the end of the catwalk, giving fans nearly 10 minutes of up close and personal time with the living legends.

Other highlights included “Dude (Looks Like A Lady),“ “Love In An Elevator,“ and the classic “Same Old Song and Dance.“

Aerosmith were also celebrating the 21st birthday of one of their biggest commercial successes – “I Don’t Wanna Miss A Thing.”

They closed out the evening with a rowdy take of “Toys In The Attic,” which was fantastic to hear live.

Not to disappoint, the band returned to the stage for an encore. A grand piano rose from beneath the catwalk, and Steven Tyler gently played the intro notes of “Dream On.” The crowd sang along with him. Aerosmith cranked things up one last time with one of the biggest rock anthems of all time – “Walk This Way,” which featured a special nod to Led Zeppelin’s “Whole Lotta Love” at the end.

After the performance concluded, the band basically hung out on stage for a bit. The lights came up, and Steven Tyler thanked the crowd once more for coming out. He introduced the band members one by one, and they called it a night. The extra bit of intimate interaction was truly what these Deuces Are Wild shows are supposed to be.

Missing from the set were classics like “Draw The Line,” “Back In The Saddle,” “What It Takes,” The Other Side,” “Adam’s Apple,” “No More No More,” “Get The Lead Out,” and “Nobody’s Fault” – any would have been awesome to hear. The band also completely stayed away from their last three studio albums including 1997’s Nine Lives. Despite mixed reviews from critics, the album contains some great material like “Falling In Love (Is Hard On The Knees),” “Taste of India,” and “Attitude Adjustment.”

Also absent were more recent radio hits like “Jaded” and “Legendary Child.” Aerosmith’s that began in 1973, and since then they’ve released 14 studio albums containing countless memorable tracks. Choosing a setlist at this point must be damn near impossible. Althought there were some cuts that could have been played, Sunday night’s song selection was nothing to sneeze at.

Aerosmith’s Deuces Are Wild East Coast Run wraps up next week with a string of four shows at the MGM Springfield in Springfield, MA.

Welcome to the Revival of rock 'n' roll music. The way you used to hear rock, see rock, and feel rock is going to be shattered into a million pieces, reassembled, and revived. Dive into the realm of rock with interviews, concert coverage, and breaking news that make the music seem real again - in your ears, in your mind, and right in front of your very eyes. You'll feel the cool steel of the guitar strings and the smooth wood grain of the drum sticks right in your hands, all with the echoes of reverb in your head. This is the way rock was supposed to be experienced. Welcome to the Revival of rock 'n' roll music.
View all posts by Matt Bishop →
Tagged  Aerosmith, Atlantic City, borgata, Joe Perry, review, Steven Tyler.
Bookmark the permalink.