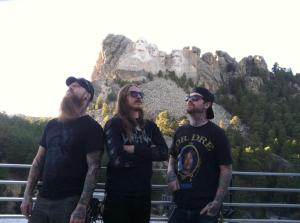 Setting the tone for Orion Festival was none other than swamp metal outfit Black Tusk with the kickoff performance Saturday on the Damage Inc. stage. The band’s self-dubbed brand of ultra-heavy southern metal was given much praise in Atlantic City. After their set, I caught up with frontman Andrew Fidler to talk about the band’s set, upcoming tour plans, their recording process, and more.

“Dude, it was great,” said Fidler about the band’s Orion set. “I mean, there’s barricades, obviously, barricades are kinda energy-snappers, but there were still kids out there moshing with their shirts off.” Fidler also added that it was a great honor to be chosen by Metallica to play at this festival. “To be asked by Metallica to play this festival, and to open the festival, it’s amazing. It’s an honor.”

Black Tusk has been touring for the last year in support of their latest album, Set The Dial, which included a run with fellow Orion rockers Red Fang. Post-Orion is a European run, and then the band has an epic fall tour lined up which will be announced closer to the end of the summer. After this touring cycle, the band will be heading home to begin recording their next album, for which Andrew already as almost 30 riffs written. In the meantime, set your dials for the fall. – by Matt Bishop 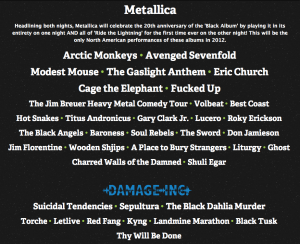 THE LIFE OF A RUNAWAY - A CONVERSATION WITH LITA FORD