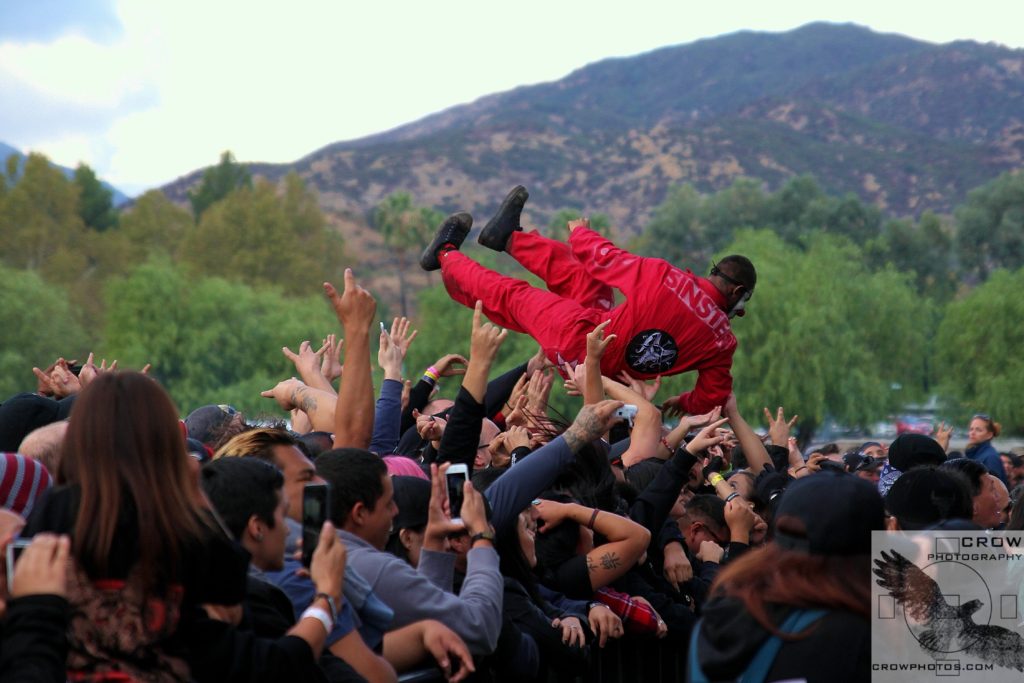 Day two of Ozzfest Meets Knotfest 2017 belonged to the “maggots”, the fans of Slipknot who showed up en masse despite Slipknot being absent from the lineup. Corey Taylor’s “other band”, Stone Sour, anchored the main stage, centered between the cholo goth of Prayers and the return of Eighteen Visions metalcore on one end, and the grand theatrics of Marilyn Manson and Rob Zombie on the other. 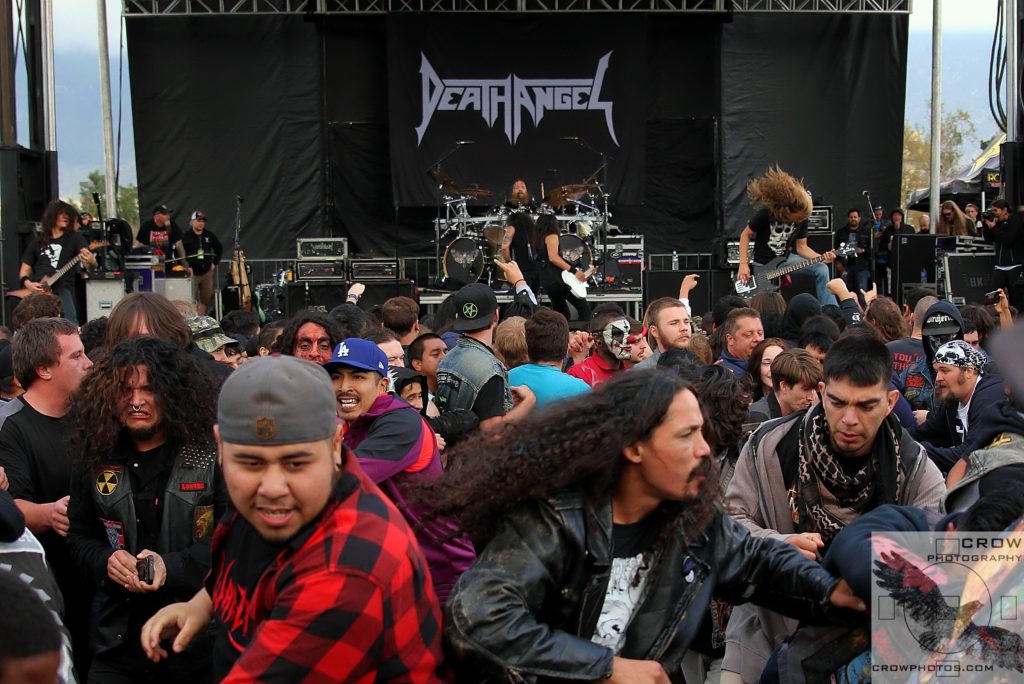 Ozzfest was hot during the day on the festival grounds, and a chill was in the night air for the main stage acts. During the early morning of Knotfest, the rare California rains came down, turning the dusty mosh pits into slippery mud pits. It made no difference to the moshers, who were in full swing as soon as the gates opened at 11:00 am. Those who had spent the night partying on the campgrounds somehow managed just enough sleep to get after it again on Sunday. 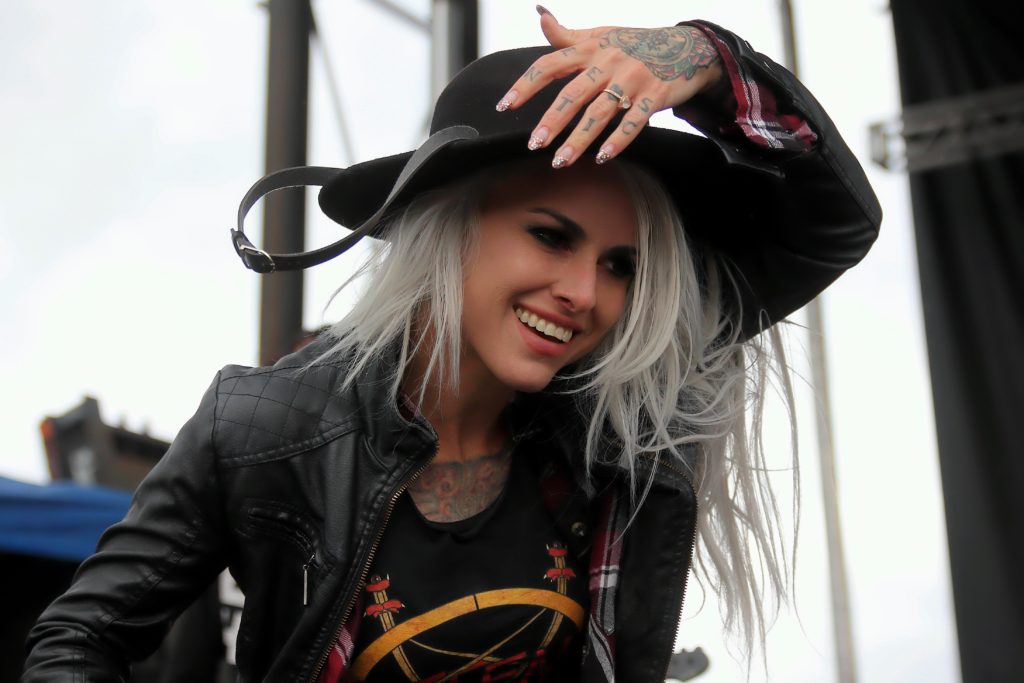 The gloomy daylight brought alternating half hour sets on Second Stages A and B, located on the massive festival grounds of the Glen Helen Amphitheater in San Bernardino, California. The full gamut of metal was represented well by DED, Stitched Up Heart, ONI, Code Orange, Death Angel, Goatwhore, Upon A Burning Body, Black Dahlia Murder, Life Of Agony and Testament. As the last rays of light descended beyond the mountainside, perhaps an hour earlier than expected due to the end of daylight savings time, Testament played on through the night with a single spotlight jerry-rigged to light their way. 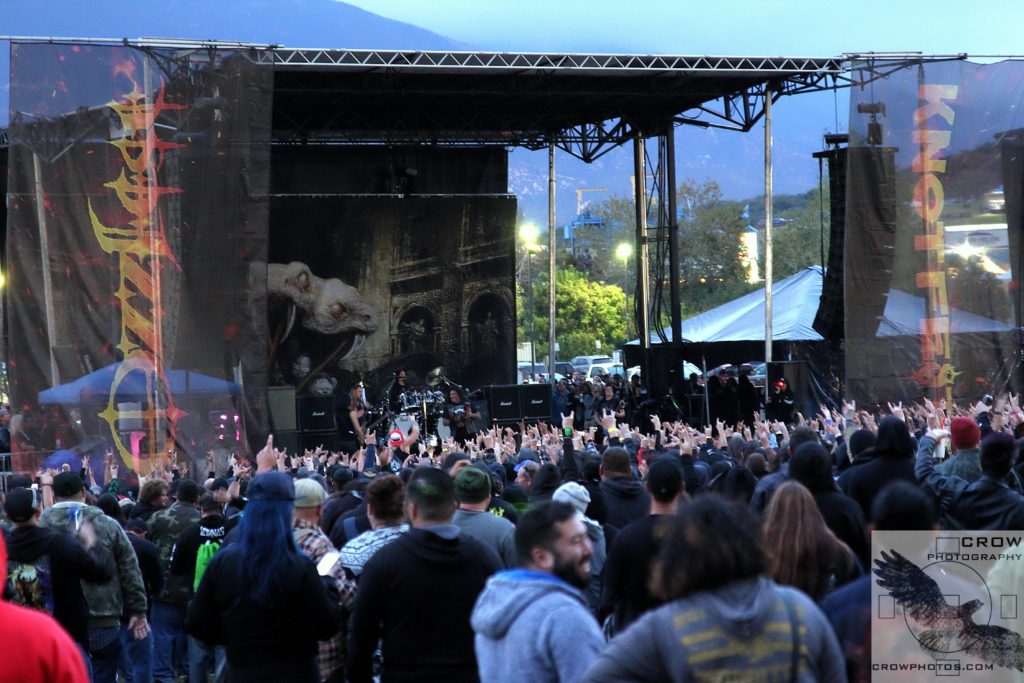 One of the best parts of festivals is the special appearances and collaborations that sometimes occur, and should happen more. The biggest treat of this weekend was seeing Sirius XM Metal Ambassador Jose Mangin joining Upon A Burning Body to sing ‘Til The Break Of Dawn. 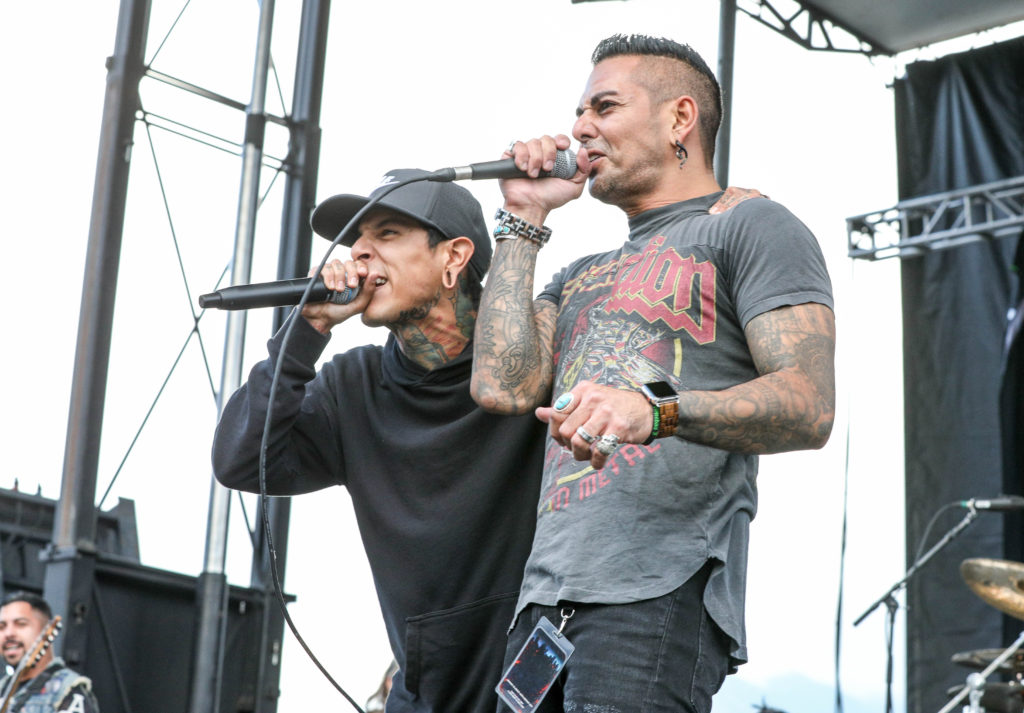 Once again, the Nuclear Blast Extreme Stage featured the heaviest of metal throughout the early afternoon. Warbringer, Exhumed, Repulsion and SID tore up what was left of that portion of the grounds. After choosing their favorites from a plethora of food and drink options, fans made their way up the hill and onto the huge lawn or down into the seats and the main stage pit. 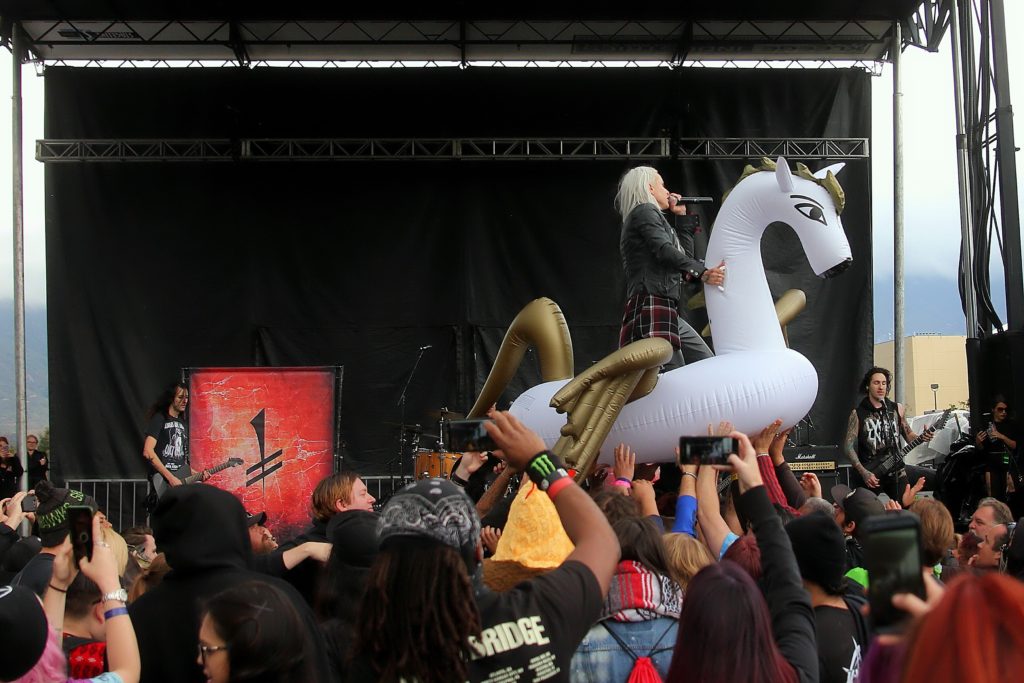 The first band on the main stage was Prayers, a San Diego electronic goth-like duo with religious overtones, especially in their stage setup. Armed with two electric turntables and a microphone, they had no problem filling the amphitheater with sound and power. Next up was the return of Orange County’s Eighteen Visions after a decade away. James Hart screamed his way through an intense lighted fog over loud guitars. 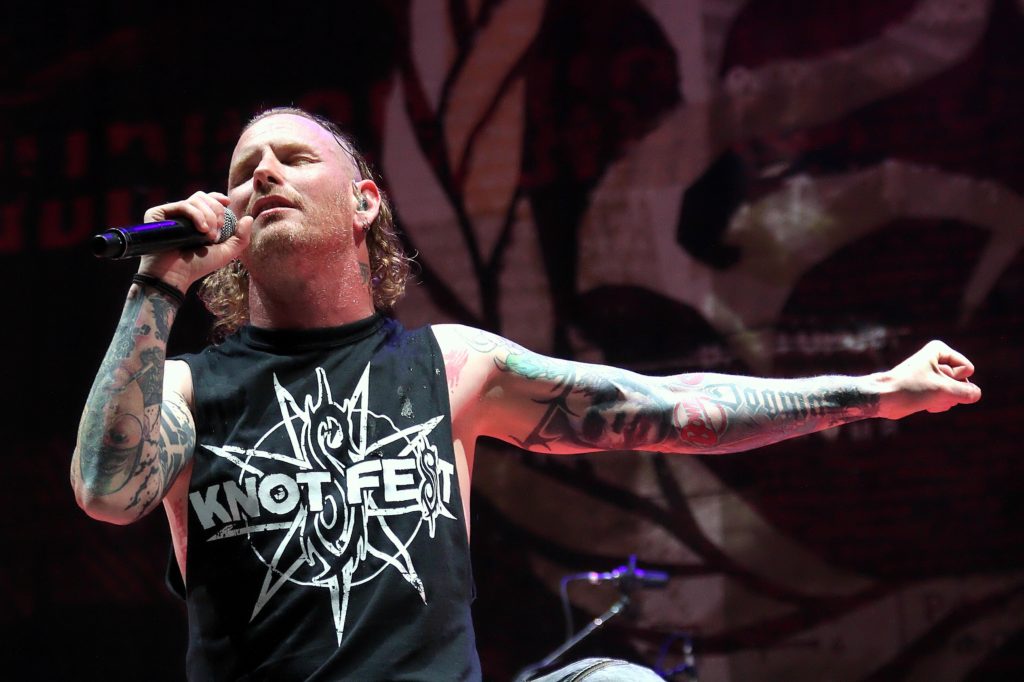 Corey Taylor naturally stole the show, as he should, after all, it is his show. Stone Sour is one of the greatest live bands around, and they never fail to disappoint. Taylor’s magnetic personality and dynamic vocals could probably draw a festival crowd by himself. The only possible complaint was the set was too short. 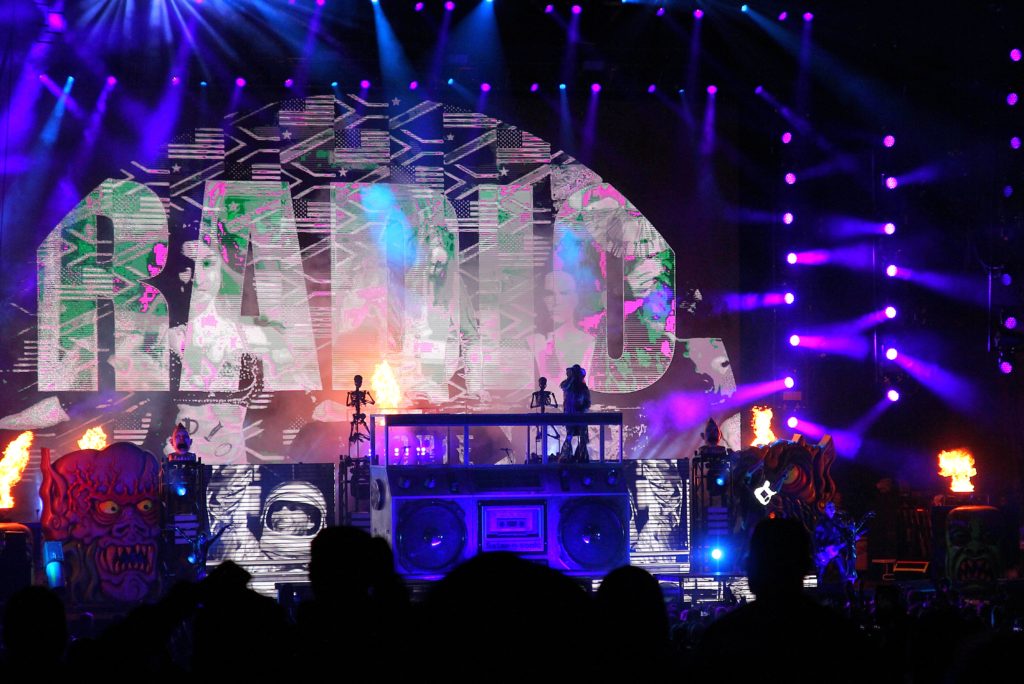 The night was not even remotely over, though, as Marilyn Manson was wheeled onto the stage, strapped to a vertical gurney, attended by orderlies. This was his first show after becoming a “victim of gun violence” when his prop pistols fell on him in September, crushing his leg. Despite moving slowly, he still delivered a passionate performance. The final act of Ozzfest Meets Knotfest weekend was the one and only Rob Zombie. The master of stagecraft and showmanship was on top of his game, and on top of the biggest boombox the world has ever seen. With a set full of hits that everyone knows, it was the perfect ending to the weekend and the final nail in the coffin of the fall festival season.

A full gallery of Knotfest 2017 images can be found below:

A full gallery of Knotfest 2017 crowd images can be found below: