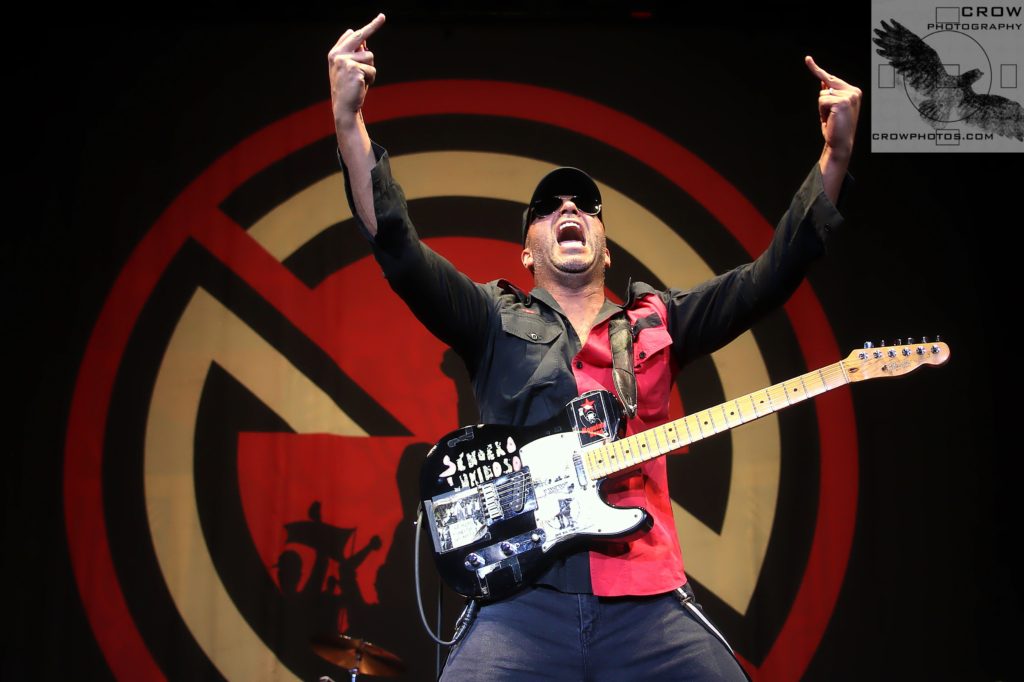 Ozzfest is a festival unlike any other and for the past two years Ozzfest has linked up with Knotfest to give metal fans a unique experience. The first band on Second Stage A hit the stage at 11:00 AM and Ozzy’s last lyric was sung at 11:00 PM. For those 12 hours there is not one moment when music is not ringing in your ears. There is something for everyone at Ozzfest, from metal and thrash to speed metal, punk and everything in between. If you love this genre of music this festival is where it’s at! 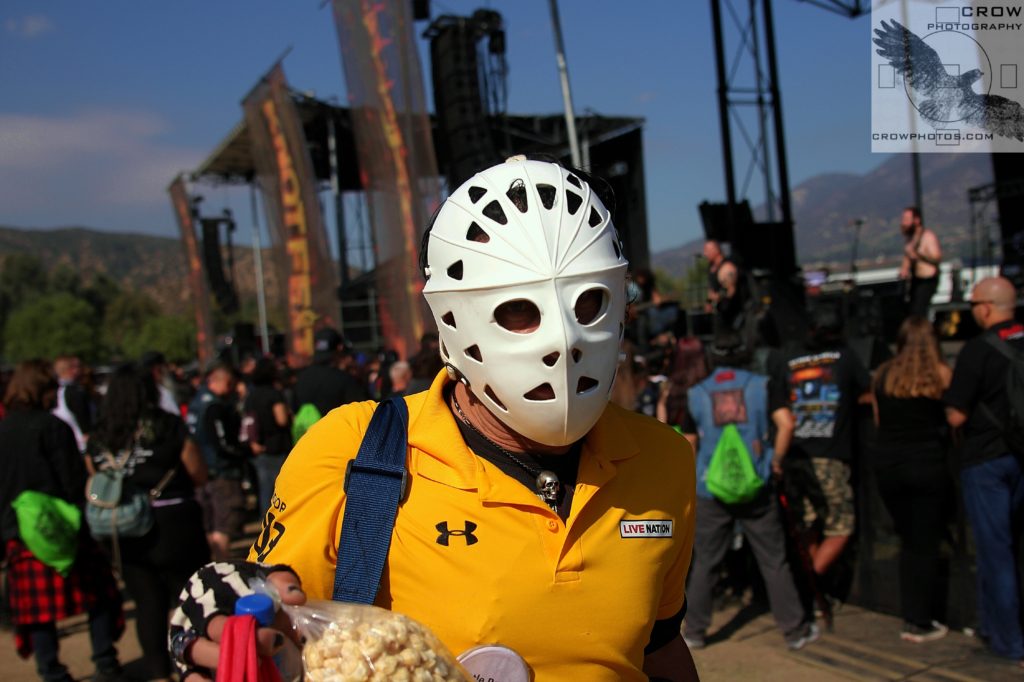 When first entering Ozzfest you are greeted by booths selling everything from paintings to masks and rock t-shirts of every kind, then endless booths of beer, water and food and fortunately plenty of restrooms. It’s a place of clashing styles and attitudes all united under one banner – metal. When you walk past the main amphitheater and make your way down to the festival grounds there is a sea of black clothing and patch vests, and the only bright spots are yellow jackets of vendors and security. Your senses are overwhelmed with the sights and sounds of Ozzfest. A vendor in a Jason hockey mask selling popcorn and water, people dressed punk standing next to people dressed for the beach, tattoos, piercings in places they should be and in places they shouldn’t, the smell of BBQ, smoke from the grill rising over a PETA booth. This is Ozzfest! 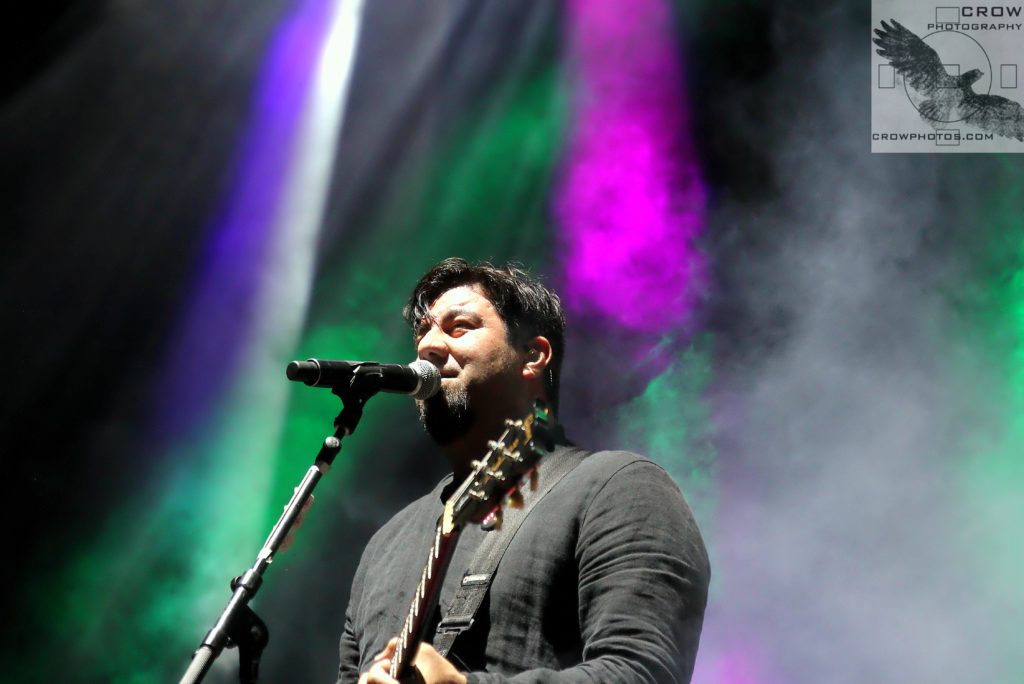 The first band we saw was Night Demon, a three-piece out of Ventura, CA.  This band is heavily influenced by Iron Maiden. In fact when speaking to singer and bassist Jarvis Leatherby about their distinctive Maiden sound he smiled and said “you know when people ask ‘What Would Jesus Do?’, we ask ‘What Would Maiden Do?’, and it always works out.”  The band’s throwback sound to 80’s metal is unique and welcoming to the ears at a venue like Ozzfest.  In fact it was Leatherby’s trip to Ozzfest 20 years ago that inspired him to take the path that lead him to a career in music. After a dead end job he, Dusty Squires on drums and Armand John Anthony on lead guitar started a band for fun but when the crowds got bigger they all quickly realized they had something really special and decided to put everything they have into the music they create. Leatherby left me with these inspiring words so true to all of us looking to find ourselves, “Do what you love to do, if you love to sweep streets get a new broom and sweep the shit out of those streets. Be the best at what you do.” The way this band sounds, with their unique and distinctive sound and high reaching vocals, they are on their way to being one of the up and coming greats. 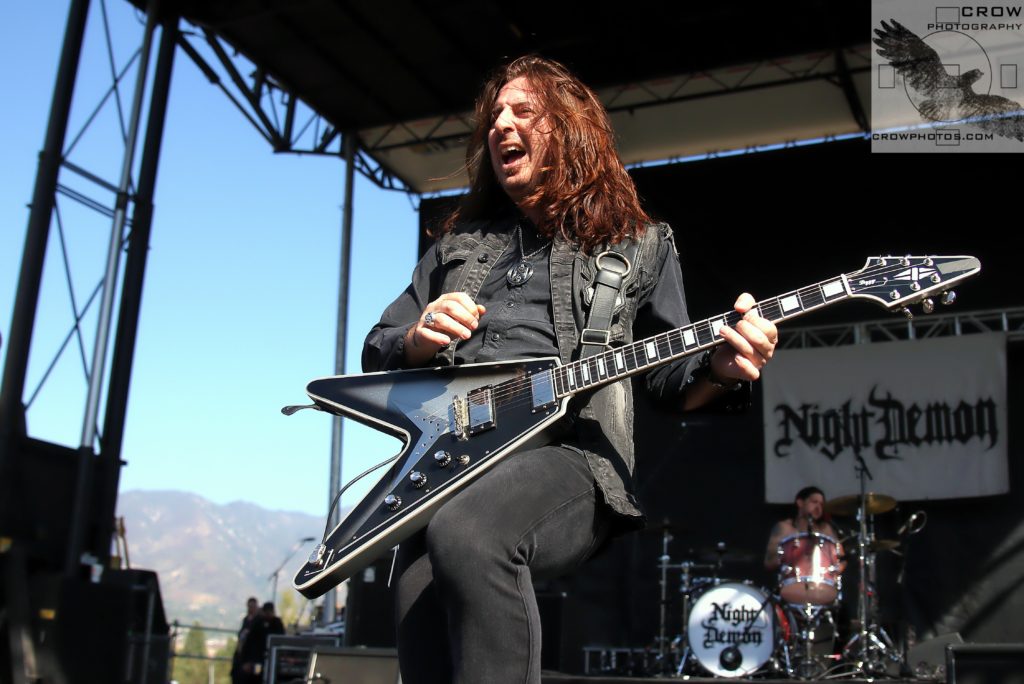 For hours afterward, the bands kept coming, 30 minute sets on two stages side by side.  The bands that played the festival grounds on Second Stages A and B represented every style of metal, in sound and fashion. Thrown Into Exile, Night Demon, Tombs, Kyng, Havok, 1349, Iron Reagan, High on Fire, Baroness and Kreator filled the high desert air with sonic booms. The Nuclear Blast Extreme Stage cranked up the attitude with Rings of Saturn, Fallujah, Suffocation and Possessed going hardcore. 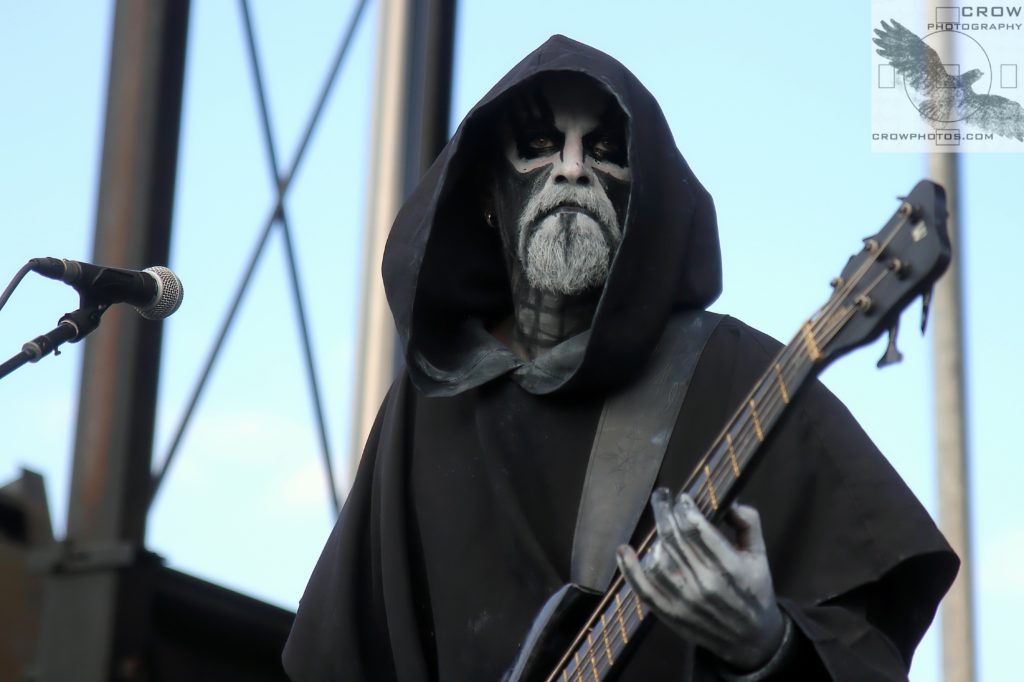 After watching all the metal we could handle we had the opportunity to speak with one band with a really distinctive sound and clear message, Havok. From deep grinding vocals, to bass riffs echoing Infectious Grooves, to hard hitting guitar riffs reminiscent of Lamb of God, this band’s musical influences are evident far and wide. Their new album ‘Conformicide’, released this year, is filed with politically charged lyrics. Intention to Deceive begins with a recorded intro “…and in the news today we cover trivial stories to distract you from what’s really going on in the world; it’s 5 o’clock and here’s what we want you to think”, and you can probably tell where the song goes from there. When we asked David Sanchez (vocals and rhythm guitar) about the message, he just smiled and said, “The world is an endless fountain of inspiration for pissed off people; you can thank George Carlin and my Mom for that.” Speaking with Sanchez, drummer Pete Webber and lead guitarist Reece Scruggs, I learned just how much this festival influenced them and probably so many other acts. The band members’ trips to Ozzfest in the early 2000’s inspired their musical careers, in particular Ozzfest ’04 when Lamb of God headlined stage two.  Scruggs’ passion for their music was evident when he described watching them on stage and their influence is evident in his expression filled playing style. For Havok this was their first trip to Ozzfest and their excitement for these kinds of festivals is evident. Scruggs explains that Ozzfest used to travel, now it is permanent, requiring artists to come to them, a quality that is very European. He explains that when artist have to travel to a festival they reach different groups of people because each festival attracts a certain type of music enthusiast.  He said “You’d be surprised, you go to a festival and think that these people aren’t going to love your music and then they do, it’s a great feeling, you reach so many more people with your music at festivals like Ozzfest.” Another benefit of playing festivals like this, according to Webber, is that they are much less stressful to play than a four-band line-up on one stage. He stated “At a multi stage festival like this (the crew) takes the stress of setup and breakdown off of the band.” 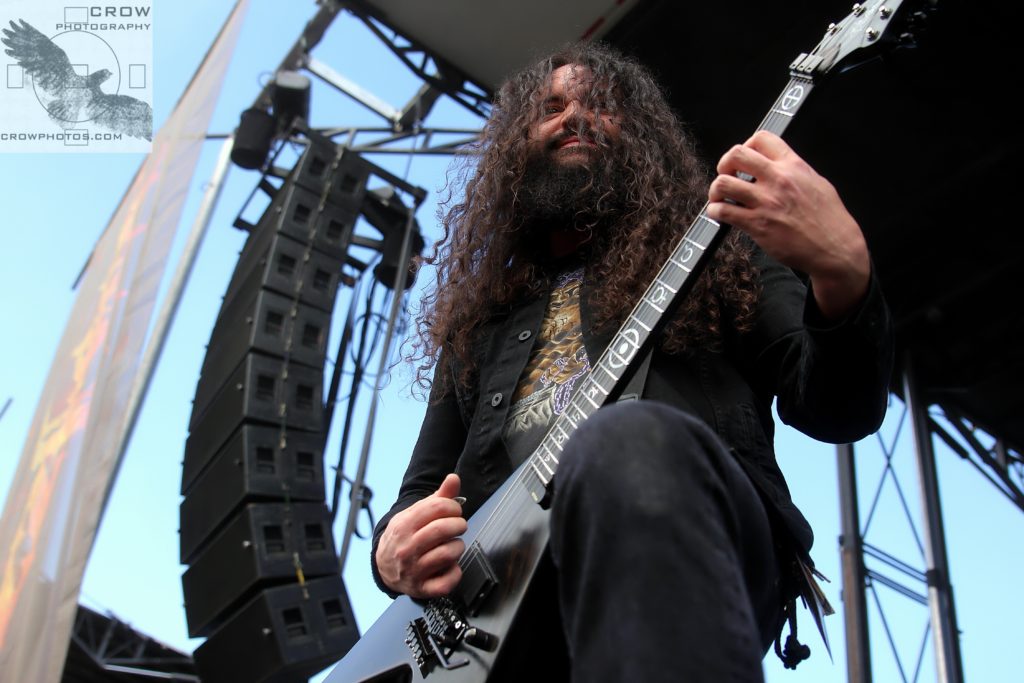 The festival scene is just the first part of the Ozzfest experience. After having already had a full day of rock, good eats and a couple beers, the night was just getting started. The Main Stage lineup was equally amazing, if not more so, as the festival experience. From 4:15 to 11:00 Orange Goblin, Children of Bodom, Deftones, Prophets of Rage and Ozzy Osbourne reunited with Zakk Wylde controlled the night. The amphitheater was packed from the massive pit through the seating areas to the expansive GA lawn. Everyone was pumped, even creating fires on the lawn to warm up the night air and create a flickering circle pit. The crowd was on their feet the entire time jumping, screaming, singing, dancing, moshing and having the time of their lives. After Ozzy screamed his final lyric and Zakk’s guitar played its last monstrous riff, I left the festival feeling a bit dazed and confused, trying to soak in this epic full day experience. Ozzfest 2018 cannot come soon enough. 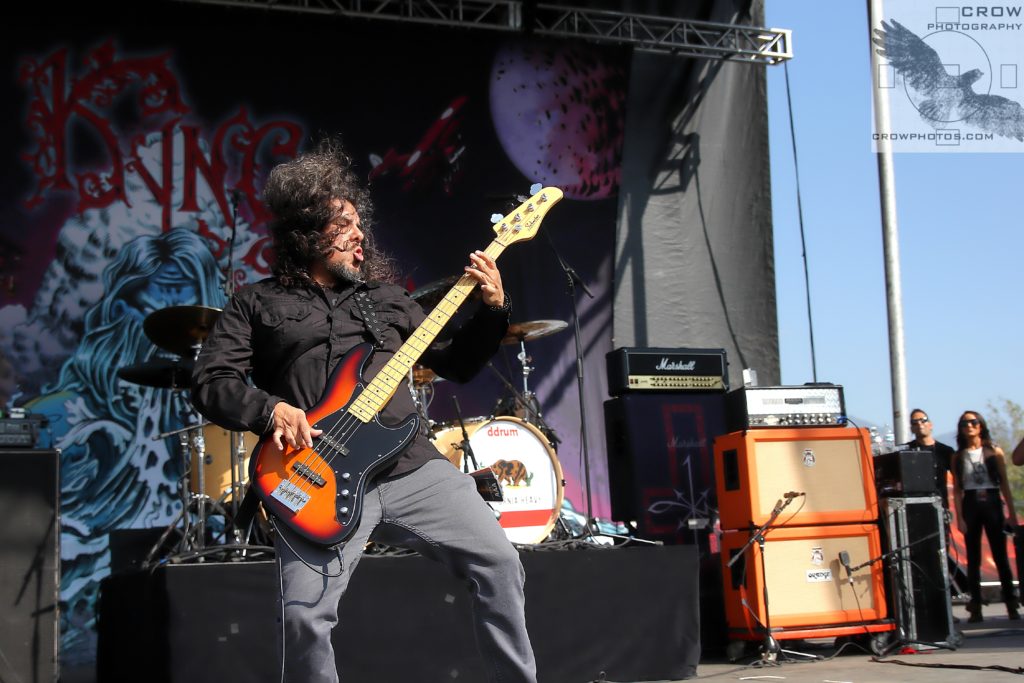 A full gallery of Ozzfest 2017 images can be found below:

A full gallery of Ozzfest 2017 crowd images can be found below: