Home » Making the Descension with Travis Stever of Coheed and Cambria

Making the Descension with Travis Stever of Coheed and Cambria 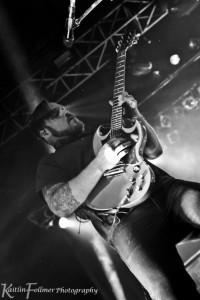 Progressive rock giants Coheed and Cambria are certainly one of the most unique and intriguing bands to come out in years. Drawing comparisons to artists like Rush, the band has certainly pushed the creative boundaries of the genre. The band is currently on a world tour in support of their latest release, a massive double album, The Afterman. The second part, The Afterman: Decension, just came out in in February.

I sat down with guitarist Travis Stever last week on the band’s tour bus outside on of my favorite venues – The Electric Factory (Philadelphia, PA) – to talk about the tour, the second double-album of their career, and much more. “It’s been going amazing, man. It’s been an overwhelmingly amazing kind of response,” Travis said of the tour. The band is at the end of a second North American leg, and Travis was searching for a word to describe it, so I suggested, “Epic?” He enthusiastically agreed. “This far into our career after so many years of doing this and the changes we’ve been through, to have the crowd still be so receptive and involved the way they are is a dream come true,” Travis added. To add to the excitement of the show in Philly that night, it just so happened to be Claudio’s birthday.

When discussing their epic two-part concept album the band just released, Travis said, “We split it up 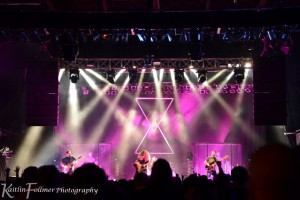 almost to leave sort of a ‘sonic cliffhanger’. If you’re watching your favorite [show] on television and you see ‘To Be Continued’, you know damn right you’re gonna tune in next week. We wanted to leave that suspense” Another factor for the double album was the quantity of material that the band had written at the time that gelled so well together. “We had so much material that we didn’t want to let go of. All these songs were perfect for the vision,” Travis said. Travis and I went on to discuss more in-depth the band’s songwriting process, how to listen to Coheed and Cambria, a possible movie, and so much more.

Coheed and Cambria signed with Equal Vision records in 2002 and released their debut LP, The Second Stage Turbine Blade. The band toured extensively on the album with the likes of Linkin Park, The Used, and Slipknot, as well as a short run on the 2002 Warped Tour. In 2003, the band released their sophomore effort, In Keeping Secrets of Silent Earth: 3. The album hit #52 on the Billboard Top 200, and was certified gold. Coheed went out on headlining tours, and also supported Thursday, AFI, Thrice, along with a second stint on Warped Tour 2003. 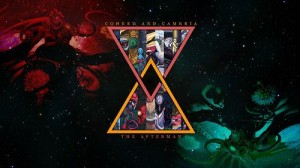 In 2005, Coheed and Cambria signed a multi-album deal with Columbia Records in 2005, and their first 2-part concept album was released later that year – Good Apollo, I’m Burning Star IV, Volume One: From Fear Through the Eyes of Madness. The album hit #7 on the Billboard Top 200, and quickly went on to sell over 1 million copies. The band toured hard for two years with support from bands like Circa Survive and Avenged Sevenfold, and in 2007, the release the much-anticipated sequel, Good Apollo, I’m Burning Star IV, Volume Two: No World for Tomorrow. Part II was met with equal praise, debuting at #6 on the Billboard Top 200. The double album catapulted the band to a whole new level of touring, as they supported Linkin Park on their 25-date U.S. Tour, headlined the 2007 Warped Tour, and mounted a headlining tour of their own with support from Clutch and The Fall of Troy. In 2008, the band released an epic cover of Iron Maiden‘s “The Trooper” for Kerrang! Magazine’s Maiden Heaven Tribute Album. 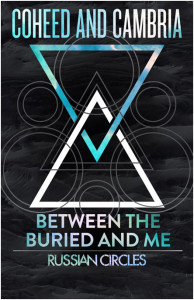 supported Heaven & Hell (Ronnie James Dio and members of Black Sabbath) on their The Devil You Know Tour. The band also took part in the Austin City Limits Festival, Wacken Open Air, Sonisphere, and Lollapalooza. In April 2010, Coheed released their 5th studio LP, Year of The Black Rainbow. The album served as a prequel to the bands first four albums, further defining the story of the Armory Wars upon which all Coheed and Cambria albums are based. It peaked at #6 on the Billboard Top 200. Frontman Claudio Sanchez wrote a novel to accompany the deluxe version of the album.

Between 2011 and 2012, Coheed and Cambria took seven months to record their new album, The Afterman. The second double-album of their career, the first record was released in October 2012, entitled The Afterman: Ascension, which debuted at #5 on the Billboard Top 200. It’s counterpart, The Afterman: Decension, followed in February 2013. The albums concentrate on the character Sirius Amory, from the Amory Wars saga. The band is currently on the second U.S. leg of The Afterman World Tour. After this run, the band is headed New Zealand, Southeast Asia, the U.S. (again), and more. Plus, there’s a few big festival gigs that the guys are keeping under wraps for now, but will be announced in the imminent future. – by Matt Bishop (Top Left & Right Photos – Kaitlin Follmer Photography)