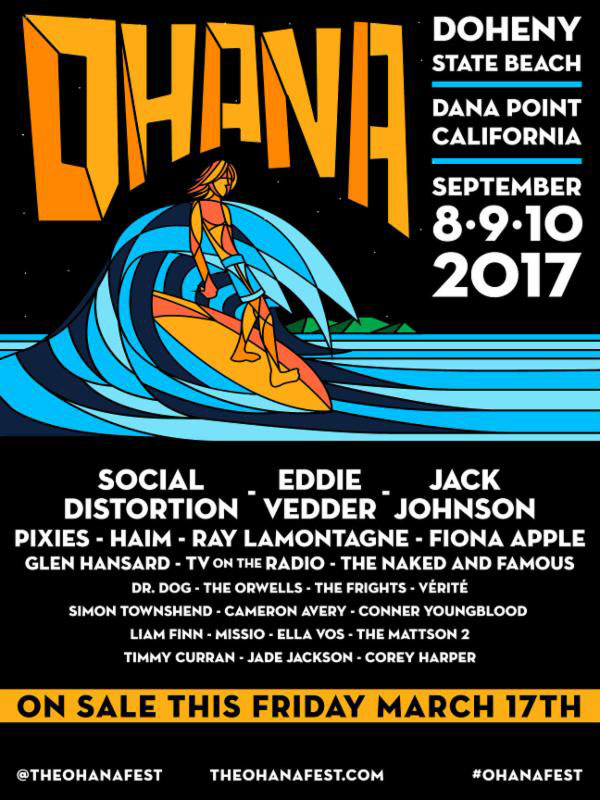 (TRR) After a successful launch in 2016 with more than 22,000 attendees, an array of impromptu pairings from the festival’s artists and perfect beachside weather, Ohana Dana Point will return to Doheny State Beach in Dana Point, CA September 8-10. The line-up for the expanded three-day second annual event will include performances from Social Distortion, Eddie Vedder, Jack Johnson, Pixies, Haim, Ray LaMontagne, Fiona Apple, Glen Hansard, The Naked And Famous, TV On The Radio and more than 25 acts (full 2017 line-up is below).

Eddie Vedder captured the essence of the event, saying from the stage: “Being able to hear music (maybe even live music) while you’re on a wave…we did that today…To invent something, that the people who had the very last row have the best seat in the house, ’cause they can see the ocean and see the music…I hope you like it as much as we hoped and thought you would.”

Tickets for Ohana go on sale Friday, March 17 at 10:00 AM (PT) at www.theohanafest.com. GA single day tickets start at $99.50 and weekend passes are $275.00. VIP passes are $499 for single day and a weekend pass is $1200. A portion of the proceeds from OHANA will benefit the San Onofre Parks Foundation, a California non-profit that cooperatively works with the California State Parks to develop, preserve and enhance the recreation and experience of California’s unique and beautiful coastal parks. Ohana is produced by Live Nation and Synergy Global Entertainment (SGE).