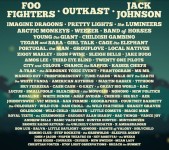 A stellar line-up has been announced for the Firefly Music Festival 2014. Foo Fighters and Jack Johnson are set to headline, along with hip-hop funksters Outkast. Other rock artists on the epic bill include Weezer, Third Eye Blind, Imagine Dragons, Arctic Monkeys, Band of Horses, The Lumineers, Young The Giant,… Continue reading