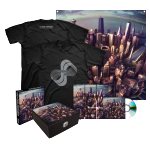 Earlier today, Foo Fighters announced that Sonic Highways would be title of their upcoming eighth studio album and that it would be released on November 10. Now, the Foos have revealed another audio teaser from the record and announced more details about the album’s physical release. In addition to CD and MP3, the album… Continue reading