Today, Mastodon unveiled a brand new track “High Road”, which is streaming now on the band’s website. “I wrote that on a day off while we were on tour in Luxembourg,” said guitarist Bill Kelliher. “I was sitting in this rainy city on a Sunday, and nothing was open. I felt like I needed… Continue reading 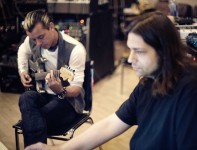 For the last few months, British alternative rockers Bush have been hard at work with renowned Grammy Award-winning producer Nick Raskulinecz (Alice In Chains, Foo Fighters, Deftones) putting the finishing touches on their brand new studio album. The band has been recording at Studio 606 in Northridge, CA, which is owned by Foo Fighters frontman Dave Grohl.… Continue reading