(TRR) – Papa Roach have announced a run of 2019 U.S. tour dates. The Who Do You Trust Tour kicks off on July 27 in Dallas, TX at the Southside Ballroom and wraps up on September 1 at the Downtown Event Center in Las Vegas, NV. Asking Alexandria and Bad Wolves will serve as special guests on select dates.

Tickets go on sale starting Friday, December 14 at 10am local time HERE. Citi Card members will have access to a special presale starting Wednesday, December 12 at 10am local time until Thursday, December 13 at 10om local time through Citi‘s Private Pass program. VIP packages and artist presales will be available starting today at 12pm local time through Thursday, December 13 at 10pm local time. Papa Roach’s 10th studio album Who Do You Trust? drops on January 18, 2019 via Eleven Seven Music. It is the follow-up to 2017’s Crooked Teeth. The disc debuted at #20 on the Billboard Top 200 and #1 on Billboard Top Hard Rock Albums. Papa Roach have sold over 20 million albums worldwide in just over two decades. The wo-time GRAMMY Award nominees broke out in 2000 with their multi-platinum LP Infest. 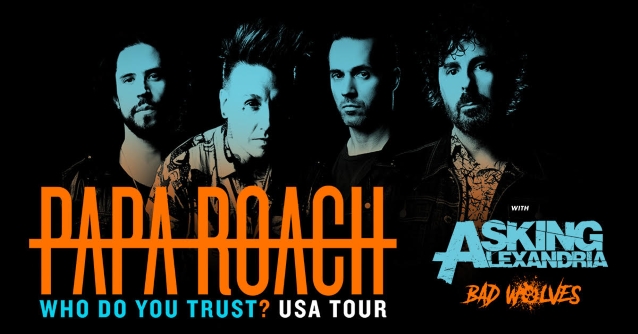 The Vandals at House of Blues Anaheim on December 22