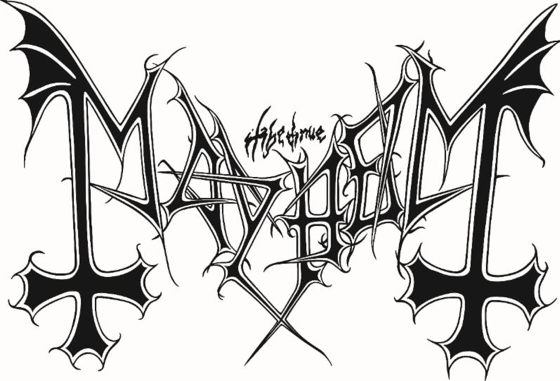 (TRR) – Norwegian black metal legends Mayhem have unleashed a new music video for “Falsified and Hated,” which can be streamed below. The track is from the band’s sixth studio album Daemon which was released digitally, on October 25. The album’s physical release arrives tomorrow, November 8.

“This is the first official music video we have released, so indeed some thought went into this,” explains Teloch. “Instead of having us filmed at some dodgy location with instruments not even plugged in, we did something different, in the true tradition of the band. We hired Johan Bååth (Watain, Lucifer, etc.) to direct the video and we also were lucky enough to get the infamous Swedish graffiti artist Ziggy Jonas Rasmusson to do his ritualistic paintings for the video.“

“When I was asked to do the very first Mayhem music video, I thought I really had to do something more than just a plain Black Metal video, I wanted to take it one step further and do something different but stay true to the genre and of course Mayhem’s iconic legacy as a band,” says Director Johan Bååth. “I thought of the artist Ziggy Jonas Rasmusson and his ritualistic paintings and I asked him if he wanted to participate. Together we came up with this idea of a ritualistic painted pentagon-shaped room, completely surrounded by five painted walls, facing a centered pentagram-painting with Ziggy´s ”hex-text” signs and symbols all over, each of the five point corners symbolizing human expiration.

In the middle we see an organic neoplasm tumor-like shaped form, all muddy and dirty with wooden branches ensnared around it. The surreal and scary-looking outgrowth is almost breathing with dark energy, attached to several plastic tubes connected to five cloaked characters symbolizing the five members of Mayhem. They´re completely occupied with different ritual tasks destroying all humanity and contributing matter and dark energy to the demon creation in the middle.”

The ”Falsified & Hated” video arrives as the band prepares for a North American tour in support of the album, co-headlining the Decibel Magazine Tour with Abbath. Tickets are available tomorrow, November 8, at 10am local time and can be purchased at decibelmagazine.com/tour.

March 18 Vancouver, BC The Imperial

Mayhem is currently in the midst of a European tour:

Welcome to the Revival of rock 'n' roll music. The way you used to hear rock, see rock, and feel rock is going to be shattered into a million pieces, reassembled, and revived. Dive into the realm of rock with interviews, concert coverage, and breaking news that make the music seem real again - in your ears, in your mind, and right in front of your very eyes. You'll feel the cool steel of the guitar strings and the smooth wood grain of the drum sticks right in your hands, all with the echoes of reverb in your head. This is the way rock was supposed to be experienced. Welcome to the Revival of rock 'n' roll music.
View all posts by Matt Bishop →
Tagged  Mayhem.
Bookmark the permalink.