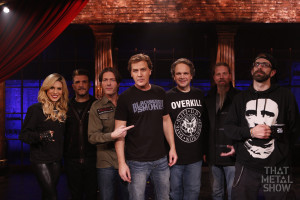 As this season of VH1‘s That Metal Show continues, things are getting heavier and heavier. This Saturday, the show welcomes long-awaited guests Lamb of God. Vocalist Randy Blythe and drummer Chris Adler are set to invade the TMS set. The band is gearing up for the premiere of their film, As The Palace Burns, a documentary about the band’s trying time during Blythe’s incarceration on alleged manslaughter charges in the Czech Republic. Much like the Thrash and Nu-Metal generations before them, Lamb of God are considered godfathers of the New Wave of American Heavy Metal. Their last studio LP, 2012’s Resolution, debuted at #3 on the Billboard Top 200, and #1 on Billboard Rock and Hard Rock Albums charts. This week’s special musical guest is Anthrax drummer Charlie Benante. Anthrax are fresh off a Grammy nomination for Best Metal Performance for their cover of the AC/DC classic, “T.N.T.”. The episode airs this Saturday, February 22, on VH1 Classic.

“I’m thrilled that the show is coming back,” said host Eddie Trunk before 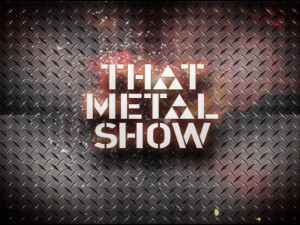 the season started. “But, I’m really excited that we’re now shooting on a weekly basis, as fans will now have the opportunity to see the new episodes as soon as they are completed.” Since it’s inception in 2008, the talk show has brought fans a unique heavy music news and discussion experience. To date, the show boasts a roster of special guests including members of Aerosmith, Pantera, Black Sabbath, Iron Maiden, KISS, Anthrax, Pearl Jam, Heart, Metallica, and many more. To hold fans over until the next season, full episodes and exclusive bonus clips from Season 12 are now airing on ThatMetalShow.VH1.com. Don’t forget to download the new VH1 App to keep up with That Metal Show on the go. – by Matt Bishop (Top left Photo Courtesy of Colin Douglas Gray)