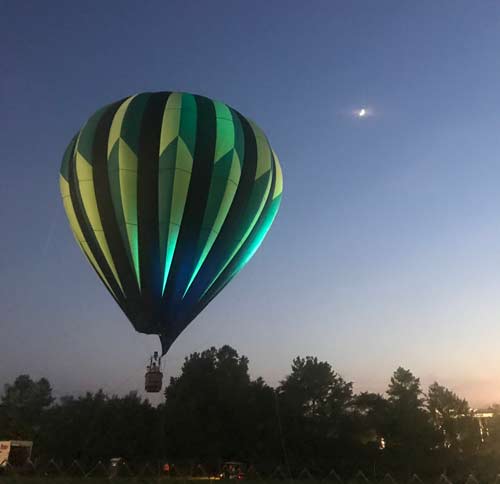 (TRR) Each and every year we look forward to the Firefly Music Festival as one of the best and brightest highlights of the summer concert festival season and the 2018 line-up certainly did not disappoint. The amazing four-day music festival held annually at The Woodlands near the Dover International Speedway in Dover, Delaware has been featuring amazing talent with big name and emerging artists since their inaugural year!

The 2018 line-up was chock full of big names, as well as, plenty of up-and-coming band that absolutely blew us away.  The Firefly Festival line-up is always a mosaic of musical genres featuring everything alternative rock and hip-hop to singer-songwriter and EDM. There is without a doubt something for each and every taste. We feel like each year we discover new and exciting bands that are poised and ready to make a huge splash within the music realm.

This year was no exception, as we were able to catch some memorable performances from bands such as Smallpools, Lord Huron, Marian Hill, Rag n’ Bone Man, Terror Jr, Spafford, Lukas Nelson and the Promise of the Real, Hotel Garuda, Charlotte Cardin, The Night Game, The Glorious Sons, and Savannah Conley to only name a few. There are tons of bands worth checking out and many are sure to become staples in our music rotation for years to come.

The headliners of Firefly Festival 2018 were all spectacular in their own right as we caught blazing sets from the Arctic Monkeys, Foster The People, The Killers, Lil Wayne, Eminem, SZA, MGMT, Portugal.The Man and Kendrick Lamar, but we delve deeper into some of those performances shortly! Firefly also featured an incredible array of noteworthy vendors and top-notch food offerings! 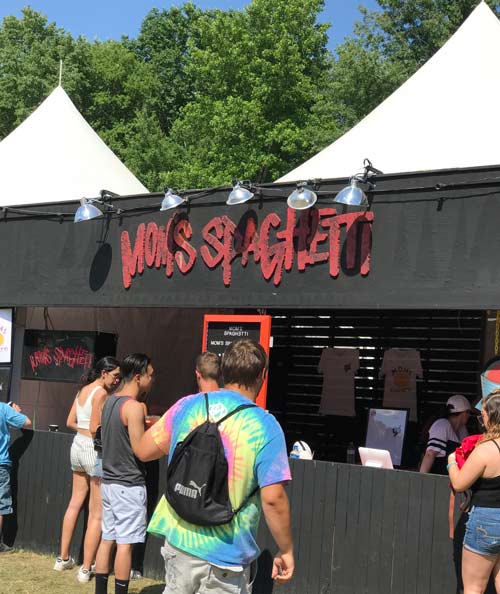 The way that this festival decorates The Woodlands is simply mind-blowing! Their art installations and lighting effects are fully immersive and it almost feels as if you have entered some type of alternative universe wonderland. From the colorfully backlit trees and light spectacular featured in The Thicket to the relaxing hammocks nestled into The Nook there was something new and interesting to see around every corner. We had a chance to sample the food offerings from “Mom’s Spaghetti” which pays homage to headliner Eminem’s track “Lose Yourself” and it was delicious, as well as reasonably priced. We also nabbed something to satisfy our sweet tooth at “Waffle De Lys” a vendor that featured authentic Belgian waffles with French twist … the banana nutella with ice cream was to die for! 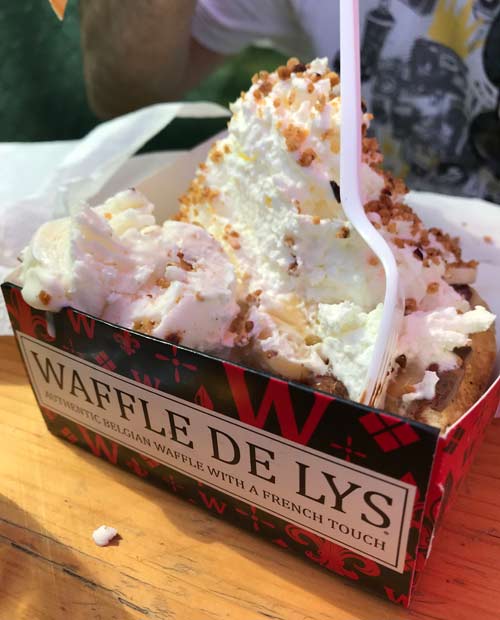 The attendance for Firefly Festival 2018 was roughly somewhere between 60,000 to 80,000 music fans and the weather could not have cooperated more! In previous years we have had to deal with issues such as rain, tornado warnings and evacuations, however this year, despite being scorching hot, we didn’t see any inclement weather situations. Eminem, who gave many shout-outs to Delaware during his roughly hour and half long performance on Saturday night even commented that he had “never seen a crowd this big”!

All of this year’s headliners appeared to be having the time of their lives performing at Firefly Festival 2018. Foster The People drew in a massive crowd on Friday night. Their set mainly consisted of tracks off the stellar album “Sacred Hearts Club”, however much to the joy of the crowd they of course threw in their hit singles “Pumped Up Kicks” and “Sit Next To Me”!  We were also thrilled to catch the Arctic Monkey’s set, as this has been the first time we have seen the band play live in quite a few years. Of course the Firefly main stage was packed and fans were eager to jam out to hits such as “R U Mine” and “Do I Wanna Know?”! Let’s hope the Arctic Monkey’s don’t leave us waiting so long between live shows again, as their live performances are always spot-on!

While The Killers, who are three time Firefly Festival veterans, could have easily closed out Saturday night with their raucous performance, it was actually Eminem who was the evenings closer, however The Killers were on fire! Singer Brandon Flowers knows how to “seduce” the crowd and despite a slight mess-up on “The Way It Was”, the rest of the band’s set was flawless. Audience members were packed like sardines in front of the Firefly main stage and belting out the words to “Somebody Told Me” and their closer for the evening “Mr. Brightside”. It’s no surprise that these guy hail for Las Vegas, as their performance was certainly a showstopper, complete with Flowers snazzy suit, bright lights and of course the good ol’ confetti cannon.

We had to fly as fast as our (tired) feet could carry us over to the Lawn stage to check out the set from Portugal. The Man, however it was well worth the trek. Their light show was mesmerizing and they have to be one of the best visually live bands we have witnessed. They do not do a lot of banter with the crowd, but certainly make-up for with the strength of their songs and fascinating visual effects. We, and of course the rest of the crowd were hanging on every word of “Creep In A T-shirt” and “Feel It Still” and the glow sticks were flying through their air during almost their entire set. It was definitely a sight to see! 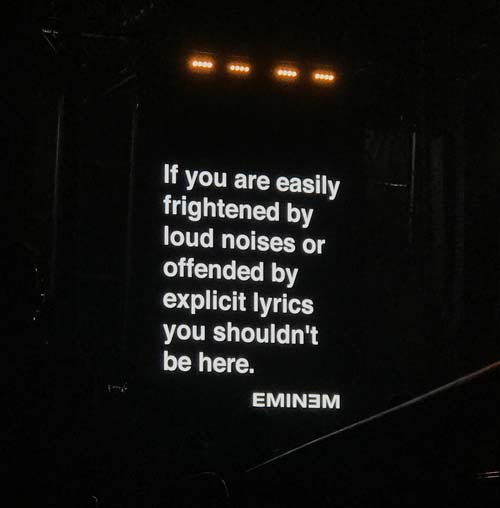 Flying back over to the main stage, it was time to catch Eminem’s set! When we say we have been waiting years for this, it is certainly no lie! He is amazing! During his set Eminem uses some rather loud sound “booming” sound effects meant to mimic gunfire, however when he recently performed at the Bonnaroo Music And Arts Festival he received quite a bit of backlash on Twitter for the use of the sound effect, as audience members claimed they were frightened and offended due to the tragic mass shooting that have occurred at music events over the last several years. We can honestly say from our opinion hearing these effects ourselves firsthand, they are the very same effects that Eminem has used in his set for years and sound nothing at all like those that would be the result of any type of incident.

As you would expect from Eminem, he stood his ground and kept the sound effect in his Firefly set and had the perfect warning pop up on the large festival LED screen just prior to him taking the stage which read “If you are easily frightened by loud noises or explicit lyrics you shouldn’t be here- Eminem”!  It was the perfect “burn” for the backlash and hey, he makes an excellent point. Eminem bounded onto the stage at exactly 11:15pm and provided us with a blistering set full of classic and a few new tracks here and there. His performance, where he was joined by hype man Mr. Porter and special guests Skylar Grey and rapper Royce da 5’9″was top notch and it felt as if no time had gone by at all since the last time we were able to catch a performance from Eminem, who is at least in our opinion, part of rap royalty.

Sunday was more of a chill and relax day at Firefly and we were thrilled to catch performance from alternative rockers alt-J and of course the triumphant return of SZA. She was amazing. SZA recently suffered some vocal issues and it wasn’t clear if she would indeed be playing Firefly, but she made her triumphant return and her voice was sounding better than ever! Rapper Kendrick Lamar closed out the night on the main stage with a perfect performance and EDM pioneers Odeza kept the party going on the Backyard stage to close out an incredible weekend of fun in the sun!

We apologize in advance for some of the crappy iPhone photos, however we were surprisingly not granted a photo credential by the event organizers, so these will have to suffice! Believe us when we say the Firefly Festival performances were visually stunning and many images can be viewed on the festivals Facebook page! Also, stay tuned for our upcoming interviews with Savannah Conley, The Night Game, Spafford and Ben O’Neill.

We certainly look forward to spending our summer weekend at Firefly 2019, as we can’t wait to see what is in-store!