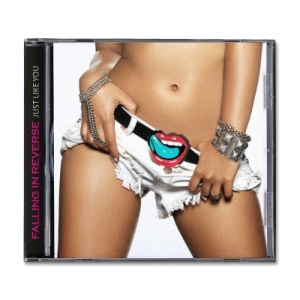 Falling In Reverse have officially announced their brand new studio album Just Like You. The disc is due out on February 24 via Epitaph Records. The band have premiered two singles from the album – “Guillotine IV (The Final Chapter)”, which can be streamed above, and “God, If You Are Above…” which can be streamed below. The new album is the much anticipated follow-up to the band’s 2013 sophomore effort Fashionably Late, which hit #17 on the Billboard Top 200. Falling In Reverse recently wrapped up a massive North American co-headlining tour with Black Veil Brides, and they are set to perform at another installment of Self-Help Festival in San Bernardino, CA on March 7 alongside Pierce The Veil, Sleeping With Sirens, The Devil Wears Prada, Whitechapel, Stick To Your Guns, The Ghost Inside, and more.

Falling In Reverse exploded onto the scene in 2011 with the release of their debut smash hit, The 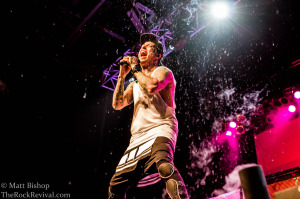 Drug In Me Is You, via Epitaph Records. The disc hit #19 on the Billboard Top 200 and sold over 18,000 copies in it’s first week of sales. A huge success, the album produced four hit singles. That same year, the band played their first-ever live shows on the Vans Warped Tour. The band toured relentlessly for the next two years with the likes of Black Veil Brides, We Came As Romans, Eyes Set To Kill, and more. They also appeared at Rock On The Range in May 2012. 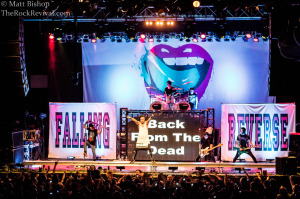 In June 2013, they released their sophomore effort, Fashionably Late. The album debuted at #17 on the Billboard Top 200. To support the record, the band embarked on the Vans Warped Tour once again in the summer of 2013. So far, the band has released two singles from the album – “Alone”, “Fashionably Late”, and, “Bad Girls Club”. Last fall, Falling In Reverse played a series of intimate acoustic shows as part of their An Evening with Falling In Reverse – Unplugged and Uncensored Tour. This summer, Falling In Reverse are set to play Warped Tour once again. – by Matt Bishop